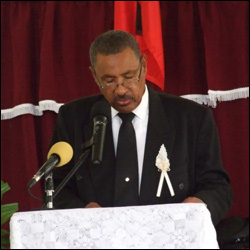 The late Dr. Joseph Christmas was eulogized Friday as the architect of improved water services in the Federation of St. Kitts and Nevis.

“Joe (Christmas) wrote a master plan for water development in St. Kitts and Nevis. He converted the slow sand filters at the La Guerite water treatment plant to rapid sand filters thereby increasing significantly the quantity of water that was treated daily through the process of filtration.  He also disinfected the water supply to Basseterre by introducing chlorination,” said Mr. Athill Rawlins, former Manager/Water Engineer in his eulogy at the Service of Thanksgiving at the Bethel Moravian Church, Parson’s Village.

Mr. Rawlins said Mr. Christmas realized very early that ground water was the future of water development in St. Kitts and Nevis and pushed that agenda with his well drilling programmes.

“He was always thinking years ahead of his time.  Once after Joe had completed the Annual Budget for the Water Department he sent it down to the Ministry for review. Later he learned that the Minister of Finance said, “What is wrong with this man Christmas is he trying to build an Empire in the Water Department!”

“Joe was one of the top experts in ground water development in St. Kitts and Nevis and beyond our shores. He left a body of information on ground water exploitation in his dissertation on the Basseterre Valley Aquifer,” said Mr. Rawlins.

He said during the years that they worked together there were many occasions when they walked into the mountains to the water sources of Wingfield, Franklands, Stonefort, and Phillips.

“I remember after the great earthquake of 1974 which registered 7.5 on the Richter Scale, Joe being a Geologist was commissioned by the Right Honourable (Sir) Robert Llewellyn Bradshaw to lead a party to Mount Liamuiga’s to investigate if any changes had occurred in the crater or on its flanks.

Anyone who is familiar with the crater knows that it is a 600 foot vertical climb down. If any of the last persons to join the decent slipped, this would have created a domino effect and everyone would have come tumbling down into the crater. Joe whispered to me that he would go down last because he was the fittest and the one least likely to slip, we both laughed, but Joe still led the way down. On these many walks I have never heard Joe puff or pant. He was always in fine physical form with the stamina of a marathon runner.  I always marvelled at his physical fitness,” said Mr. Rawlins.

He recalled one of the many working trips to Nevis.

“While on the boat, Joe jokingly identified a solitary life jacket which he claimed was his if per chance the boat should start to go down. He said to me “Athill, that one is mine so don’t go near it.” We laughed, but I do confess that I did glance in the direction of other life jackets, trying to identify one for myself. Joe loved life and he enjoyed it to the fullest.

Joe was also well known to have been a good boss, who shared his vast knowledge unselfishly with his staff. At the slightest hint, he would put pen to paper to explain or clarify a drawing, diagram or a procedure. He always wanted to be sure that there was no misunderstanding. Many of us his co-workers could attest to these facts,” said Mr. Rawlins.

He told the large congregation of mourners that Dr. Christmas’ long term planning for water resources in St. Kitts and Nevis from then until the year 2000 forms an important base for the country’s water development and it is still quite relevant today.

“Joe’s significant contributions have served to shape water developments in St. Kitts and Nevis, and I daresay in many remote areas of Africa, Asia, and other areas of the world where this son of the soil served with distinction and pride,” said Mr. Rawlins.

After joining the United Nations, Mr. Rawlins recalled one of Joe’s experiences in Africa which was replete with many interesting and hair-raising experiences.

“I can recall his account of an occasion when he had to overnight in a remote area. His chauffer and guide checked the space before Joe entered, only to find a Black Mamba snake in his room. For those of you who don’t know, the Black Mamba is an extremely venomous snake that strikes at the head of its victim. Death is almost always a certainty. Even in the wilds of the African jungle and in the face of many challenges Joe stuck to his purpose without fear,” said Mr. Rawlins.

He noted that from January 1993 to June 1994, Dr. Christmas was the UNICEF (Resident Representative to Angola based in Luanda). His responsibilities involved the management of developing activities and diplomatic relations regarding Angola and the twin Island Country of Sao Tome and Principe.

“As a linguist, he was highly proficient in English, French, Portuguese and several African dialects. This enabled him to function at a high level of proficiency in many of the African Nations where he was fortunate to serve. He was instrumental with the peace negotiations between the Dos Santos Government and the UNITA rebels in helping to end the twenty-year war which existed since Angola’s independence in 1975,” said Mr. Rawlins.

He noted also that in June 1994, Dr. Christmas was transferred to Kenya as the United Nations Resident Representative.

“His Excellency Dr Joseph Christmas, as he was rightfully called, supervised a staff of two hundred and fifty persons who were responsible to him in his mission of diplomatic and development assignments. He has truly been an excellent ambassador for his native country of St Kitts and Nevis,” said Mr. Rawlins.

Mr. Rawlins said Dr. Christmas returned home on vacation every two years and on these occasions he seized every opportunity to speak to every Minister of Government and paid courtesy calls on the Governor General in office.

“Joe maintained a close relationship with friends both in St. Kitts and throughout the Caribbean. There were times when he would call from Africa, Europe, the US and many other places. He kept in touch via post cards and telephone calls. His calls were mainly to say hello or to let me know which part of the world he was at the time,” said Mr. Rawlins, who also spoke of Dr. Christmas’ generosity.

“Joe was a generous person with his time, his money and his intellect.  You could call on Joe at any time to discuss any matter of importance to the country as he was always interested in its development in general. He concerned himself with development in education and the technical/professional fields. During his vacations at home he conducted many lectures on various topics at the University Centre and at various schools throughout the island. He started a Scholarship Fund giving an annual gift to the teacher and student nurse with the best results. He also gave $100,000 to be used for small business enterprises. He gave a copy of his doctoral dissertation to me, the Water Department, the Public Library and many other institutions,” said Mr. Rawlins, who added:

“In 1996, Dr Christmas took early retirement from the United Nations and returned to St Kitts where he became well-known as a philanthropist in the community. In 2000, he took leave from his retirement and became the Ambassador Extraordinary Plenipotentiary / Permanent Representative of St Kitts and Nevis to the United Nations, New York. He served in this position with distinction for a period of six years. In 2006, this distinguished son of the soil returned to his homeland of St. Kitts and Nevis as Ambassador at Large in his second retirement due to illness.”

Mr. Rawlins added: “Composed and dignified as ever in his later years, he never complained about the changes in his life. He accepted life with a quiet and contented disposition. In all our conversation I have never heard Joe utter an angry word or speak ill of anyone.  He spoke only what appealed to truth and reason. I can only say that perhaps he listened carefully to the admonition of the apostle Paul when he wrote, “Fix your thoughts on what is true and honourable and right. Think about things that are pure and lovely and admirable. Think about things that are excellent and worthy of praise.”

In January 2011, Dr. Christmas was honoured by Her Majesty Queen Elizabeth II with the (C.B.E.) Commander of the Most Excellent Order of the British Empire. This is an honour that he richly deserved, having served in the vineyards of the world, and having also contributed so immensely to the overall development of his homeland ““ St. Kitts and Nevis.

In closing, Joe Christmas was a very humble man. The fact that he had occupied some of the highest positions in International Organizations, sat with Heads of State, Heads of Government, and Chiefs never prevented him from associating with his acquaintances, friends and relatives or to lose the common touch.

He was a devoted son. I know that he loved and cared for his mother in every way. His love and devotion to her was extra-ordinary. When he returned home on vacation he would journey to Saddlers with alacrity to partake of his mother’s sumptuous home cooked delights.  He knew that his room and his place at the dining table were always there for him.  Even after he had acquired Dewars, his estate residence, he often slept at home in Saddlers.

He was a kind father, an affectionate and generous brother, a caring uncle to all of his nieces and nephews, a loving nephew and cousin, and a mentor and friend to so many of us. His sincerity and generosity made him loved and respected in his Village of Saddlers, and beyond its borders.

In November 2009, Joe married the love of his life Henrietta Douglas whom he had courted for fifteen years. He stated “Had I known married life would have been so sweet I would have done it sooner”. For his beloved wife Henrietta, Joe had a special place in his heart.  He spoke of her in endearing terms, and he saw her as an angel sent to him from above, and indeed she was. Throughout his illnesses and challenges, Henrietta never left his side, and on the last day of his earthly existence she was there to care for and to comfort him.

On Thursday 28th July 2011 at 2:10 pm His Excellency Dr. Joseph Reginald Christmas C.B.E., my dear friend and mentor died peacefully on the Private Ward of the Joseph N. France General Hospital, having made his peace with his Maker.

Farewell my friend, until we meet again, may flights of angels’ escort you home to your heavenly abode.

May his soul rest in eternal peace, and may light perpetual shine upon him.”