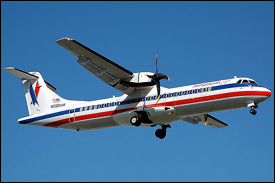 The thrust of the governing St. Kitts – Nevis Labour Administration to transform the national economy of the twin-island federation, continues to bear positive fruits.

American Airlines has announced it will increase its service to daily flights into the Robert L. Bradshaw International Airport from Miami International starting on November 3rd 2008.

“Such a significant increase in non-stop service by American Airlines during a time of widespread route cuts by US carriers is a testament to the quality of St. Kitts’ tourism product,” said Minister of State in the Ministry of Tourism, Sports & Culture, Sen. the Hon. Ricky Skerritt.

Minister Skerritt said that the sustained growth in airlift to St. Kitts is directly related to the economic development taking place in the Federation and the increasing demand for its tourism product.

He said that the daily Miami flights are ideally timed, for both connecting and local travelers to spend more time on island without having to get to the airport too early or arrive home too late.

The St. Kitts Tourism Authority said the island offers a diverse tourism product developed from the destination’s natural beauty, cultural heritage and rich history.  The island’s stunning variety of tourism attractions include hiking through the tropical rainforest, riding the scenic railway that connects the island’s sugar plantations, touring Brimstone Hill Fortress National Park, the only man-made UNESCO World Heritage Site in the Eastern Caribbean, and the more traditional vacation pastimes such as watersports, golf, shopping, tennis, gourmet dining, gaming at one of St. Kitts’ two casinos or simply relaxing on one of the island’s sandy beaches.  Guests can select from accommodations ranging from intimate plantation inns to larger hotels or resorts.