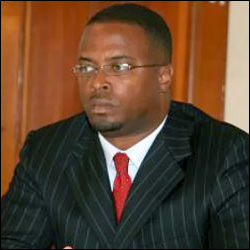 St. Kitts and Nevis’ Leader of the Opposition in the National Assembly, the Hon. Mark Brantley, was among Leaders of the Opposition from the Organisation of Eastern Caribbean States (OECS) who met in St. Lucia last Friday for a one-day meeting relating to the OECS Economic Union.

The high-level meeting, held at the Royal St. Lucian Hotel in Rodney Bay, began with an opening session, followed by a business session.

At a  brief press conference held following the business session where Chairman of the OECS, St. Lucia’s Prime Minister Hon. Dr. Kenny Anthony who headed a four-member panel to explain the purpose and outcome of the meeting.

According to St. Lucia Online.com, Dr. Ishmael explained that the meeting was “historic” in nature by virtue of it being the first forum where leaders of the opposition met in one place to receive a presentation from the OECS on the Revised Treaty of Basseterre (RTB). Key on the meeting’s agenda was discussing the establishment of the OECS Assembly, one of the most important and critical organs envisaged under the Revised Treaty of Basseterre.

“I think it’s very fair to say that the presentations today were received with a fair degree of passion and enthusiastic debate, as well as incredible support for the architecture of the OECS Economic Union,” Dr. Ishmael told reporters last Friday afternoon. “I think what has been very profound throughout the entire day was the incredible support by the Leaders of the Opposition for the establishment and creation of the OECS Economic Union and the principles of the creation of the single space and the benefits that this is set up to deliver for the people of the OECS.”

Other components on the OECS Economic Union’s priority list include facilitation of travel, one of the earliest items on the RTB. That issue, Dr. Ishmael said, was accommodated as of August 1, 2011 when all OECS citizens had the right to travel freely and to request the establishment of their rights of indefinite stay. Other components include registration of companies, the enabling of OECS entrepreneurs to establish Pan-OECS businesses, an application received by members of the OECS Authority last January with respect to request for membership from Guadeloupe and Martinique and inaugurating the final two organs under the RTB, namely the Economic Affairs Council and the OECS Assembly. Also key on the Authority’s agenda is the need to ensure that the non-independent territories are supported in their quest to accede to the RTB.

Going forward, Dr. Ishmael was hopeful that the prevailing spirit at the meeting not be lost. To that end, she said it was agreed, as was encouraged by Dr. Anthony during his opening remarks earlier in the day, that an annual encounter between Government Leaders and Leaders of the Opposition to discuss issues of common interest under the rubric of the OECS Economic Union.

That idea, she said, was widely received by the Leaders of Opposition. Keeping them apprised of the various stages, she said, is crucial to process since Leaders of the Opposition stressed the need for such a framework in which they can “seek, together with government, to undertake and implement the sort of governance architecture” required at the national level to be able to move the spirit and intention of the OECS Economic Union.

“Leaders of the Opposition themselves felt quite strongly that in the work as it pertains to the region, that there was need for us to consider institutionalization of a mechanism whereby Leaders of the Opposition can, in fact, receive reports on a regular basis, not only, for example, on the state of financial health of the Currency Union. But also on some of the more technical work that we have embarked on in implemented aspects of the OECS Economic Union protocol. For example, there was quite significant and sustained debate today on the creation of the single space and the circulation of goods and services within that space and the requirements on each member state to, in fact, being able change parts of its customs and border architecture to be able to allow goods and services to flow freely,” the OECS Director General explained.