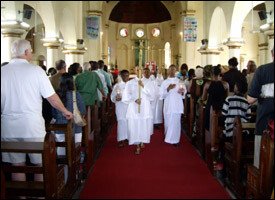 As Hurricane Paloma battered parts of Cuba and rescue teams searched for students and teachers trapped when a school collapsed in Haiti, Catholics on St. Kitts gave generously to their cause.

The second collection during Saturday night and Sunday morning mass will go towards the two Caribbean republics to assist them in the aftermath of recent hurricanes.

Two weeks ago, St. Kitts and Nevis Prime Minister Hon. Dr. Denzil L. Douglas presented a cheque for EC$100,000 to the Resident Cuban Ambassador to assist Cuba in its recovery.

Both nations have been devastated by Hurricanes Ike and Gustav and the collection on the weekend came at a time when both islands were dealing with new crises.

In the eastern part of Cuba, the most powerful storm to hit the area in 70 years, struck the area on Saturday night with 145 per hour winds, moving the roofs from most of the houses.

Roofs remain off houses. Food is in short supply and electric power was restored just last week to parts of the province where Paloma came ashore.

Hurricanes Ike and Gustav together caused an estimated US$9.4 billion in damage. As many as 140,000 homes were damaged or destroyed and nearly a third of Cuba’s crops were destroyed.

This time, government officials said, Santa Cruz del Sur was hit the hardest. More than 400 homes were partially or totally destroyed there. Another 110 were lost in Las Tunas.

Still, authorities said, not a single life was lost anywhere in Cuba.

They credited the government’s well-coordinated emergency response. Nearly half a million people evacuated in advance of the storm, including nearly 6,000 from Santa Cruz del Sur.

Sunday, authorities played video images of the destruction for a group of about 800 of them sheltered at the University of Camaguey.

In PETIONVILLE, Haiti, Haitian and international search-and-rescue officials told reporters Monday that they have done all they can to ensure no survivors remain under the rubble of a school that collapsed last week.

Teams have been searching the ruins since Friday, when the three-story concrete structure collapsed, killing more than 90 people and injuring 150.

No survivors have been found since early Saturday, when rescuers pulled several people from what had been College La Promesse Evangelique.

But hope had continued until Monday afternoon.