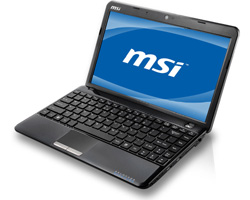 The MSI U270 netbooks recently distributed to fourth and fifth form students in St. Kitts and Nevis under Government’s One-to-One Laptop Project is specially formatted to facilitate self-paced learning.

Director of Technology Christopher Herbert demonstrated to SKNIS the capabilities of the machines which boast a dual core processor, 2GB of RAM, 320 GB hard drive, 3 USB ports, SD Card slot and VGA and HDMI inputs along with a 12.1 inch screen display.

“We are very excited about this batch [of computers],” he stated, explaining that these laptops address shortcomings of the machines distributed in the initial first deployment in June. “We have loaded it, at least initially with an alternate operating system – Edubuntu which is directed very specifically at educational institutions.

Mr. Herbert added that the use of the laptops must be in line with the empowerment thrust of Government to transform the learning environment by enhancing teaching techniques and technological tools.

The MSI U270 netbooks were preloaded with a variety of educational software suites covering mathematics, science and geography.

Math was an obvious choice given the efforts of the local Government to improve math scores which has generally been at unacceptable levels in St. Kitts and Nevis and in other territories across the Caribbean Region.

Mr. Herbert encouraged the students and their parents to ensure that the netbooks are kept in good condition. He revealed that any issues should be reported immediately to the appropriate authority at the respective schools or the Department of Technology.

Students in Forms 1 to 3 will receive their personal computers by the end of the year.