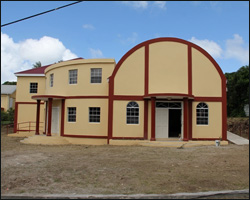 The village of Jessups welcomed its first ever community centre in a concert-like atmosphere on February 27, 2012, when the keys to the state of the art facility were handed over to Premier of Nevis and Area Representative Hon. Joseph Parry by Contractor Rudolph Nisbett amid song, dance, poetry, drama and outpourings of joy.

Deputy Premier and Minister responsible for Social Development in the Nevis Island Administration (NIA) Hon. Hensley Daniel, in brief remarks at the official opening ceremony held under the patronage of Ms. Anita Byron, told those present now that the million dollar facility was officially opened the time had come for the commencement of community development programmes that had already began in other areas.

“The programmes that we are going to do here at Jessups have already been started. Wednesday evening in Bath we are completing a Basic Plumbing Installation course and that can be moved to Jessups at your request. So we are having the graduation ceremony for that at Bath on Wednesday.

“In the first week of March, we are starting Reading Starts with Us in Cotton Ground. Next week here in Jessups, we are beginning the Computer Literacy Programme for the students who have benefitted from the Government’s One to One Laptop Programme and other High School and Sixth Form students to enable them to use the internet as a form of research”¦ So when we put down the buildings that’s stagee one. Stage two is the programmes that will make the difference here in the community centres” he said.

The workshops would be held on Saturdays at the Jessups Community Centre, the fifth such centre to be officially opened by the Nevis Island Administration in the past two months.

“We had a major concert in Fountain a few weeks ago to raise funds for a cancer survivor. Someone told me just yesterday, that activity went down well they raised some $4000 in one concert in the new community centre in Fountain.

“In Cotton Ground we held the first Sports Awards Ceremony under the Government two Thursdays ago at the community centre. At Barnes Ghaut there is an exhibition on Black History going on now and finishing on Wednesday and in Combermere yesterday, Methodist men from all over the island had a special service at the brand new community centre in Combermere. So ladies and gentlemen you in Jessups with this kind of tempo, this kind of excitement you will determine which programme starts very shortly,” he said.

The Social Development Minister also responsible for Culture said the NIA was minded to put to use the talents of the local people and believed in them, hence the reason why all community oriented programmes were encouraged at the Centres.

Mr. Daniel also disclosed that the NIA had been in discussions with a corporate citizen who had expressed interest in assisting with computers for the community centre. He also said Mr. Eugene Stapleton from Barnes Ghaut had been recruited to conduct the Computer Education Programme throughout the island.

The Minister stated that all the community centres could facilitate computer training and in Jessups, there would be continued training in the Performing Arts, music, dance and drama at the centre there.

Notwithstanding, the Social Development Minister reminded those present that the construction of a computer centre was costly and urged them to care for the new facility.

“We want to ensure that this society makes the best use of all the resources human and technical and this centre will become the focal point of life in Jessups. I look forward to working with you our staff is ready the people are ready and I suppose all we could say now is action!” he said.

Meantime, Permanent secretary in the Ministry of Social Development Mr. Alsted Pemberton in his overview of the project said construction began three weeks after a contract was signed with Mr. Rudolph Nisbett of Jessups Village and Best Deal Construction Services to construct the facility.

The contract covered labour and machinery while the NIA through the Public Works Department (PWD), provided materials labour. The building was designed and drawn by the PWD with assistance from Michael Dore of Dore’s Architectural Services. The Project Management was done by the PWD to reduce cost to the NIA.

The estimated $1.3million Jessups Community Centre consists of two floors. The ground floor is approximately 3600sq ft. and contains an auditorium of about 1560 feet with a stage and adjoining costume room.

Adjacent to the auditorium is a ticket booth and a large kitchen measuring 275 square feet. It will be used for training purposes and is strategically placed to serve the attendees in the event of a function.

Mr. Pemberton explained that provisions were made for a large extractor fan for the kitchen to keep it cool and control the fumes. Also on the ground floor is a laundry, male and female washroom facilities with two toilets specifically for the handicapped. An internal staircase leads to the first floor with a ramp for the handicapped on the external eastern side of the building which also leads to the top.

The first floor measures 1680 sq ft. and contains  a computer room for at least 15 persons at a time, a training room, reading room, library, server room and male and female restrooms with toilets and lavatories.

It is an air-conditioned building and provisions have been made for internet, telephone, cable services and a stand by generator. There is also a cistern with the capacity of 20,000 gallons of water. The facility will not only be used for community activities but will also be used as a hurricane shelter.

The main parking is located at the front of the building towards the public road to facilitate easy entry and exit. The property would be eventually fenced and paved.