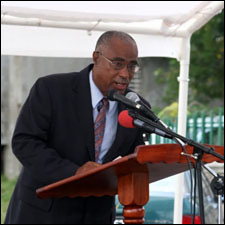 On Friday, August 1st, 2008, the government and people of Nevis will commemorate the 38th Anniversary of the 236 lives lost during the MV Christena Disaster on August 1st, 1970.

The Premier of Nevis, the Hon. Joseph Parry said, “This disaster brought a significant new beginning to Nevis and we must never forget its importance in the history of the island.”

According to Whitman Browne, in his book, The Christena Disaster in Retrospect, the sun shone brightly that Saturday afternoon and people everywhere were in happy holiday moods. Scores of people were leaving St. Kitts for Nevis as August Monday, the traditional holiday to commemorate the abolition of slavery in 1834, was two days away. Horse races were scheduled to take place on Nevis, and People from St. Kitts, Nevis and abroad were determined to be there for the merriment, rest and relaxation, and reunion with family members.  The sinking of the MV Christena has been recorded as the single most traumatic event to have occurred in the Federation of St. Kitts and Nevis.

This year the memorial service will be aboard the M.V Sea Hustler.