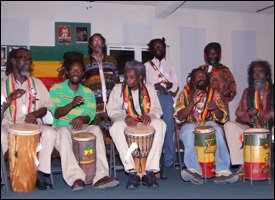 Members of the Caribbean Rastafarian Organisation

Tuesday marked the final day of a five day 13th Summit of the Caribbean Rastafarian Organization on Nevis but the delegates who attended from across the region will leave the island with powerful words of Deputy Premier Hon. Hensley Daniel who called for their urgent assistance.

At the start of the Summit on Thursday, Mr. Daniel called on the Rastafarians to help craft better communities and challenged them to utilise their ideals to join with civic organisations and governments to help craft independent and self reliant societies.

“We must be able to walk through our cities at all hours of the night and day without the fear of being attacked by our own black brothers and sisters,” he said.

The Deputy Premier who is also the Minister responsible for Social Development, Youth and Gender Affairs, referred to the violent trend that had been sweeping the Caribbean as a struggling one which should stop immediately.

“We do not have the resources to police the community. It is far easier to teach young people to be able to control their anger and their urges.

“Violence is threatening and is shaking the foundation on which our society rests. It is making life too difficult for the region and the Rastafarian Movement with its long history of peace and goodwill, love of neighbour and friends, sharing and caring, has a very, very, very good chance to help us. I want to urge all of us, particularly in dealing with our young people to find a way to help us. We need your help urgently,” he said.

Mr. Daniel pointed to an ongoing workshop hosted by the Ministry of Social Development on Nevis for 20 young people in anger management, who had exhibited violent tendencies.