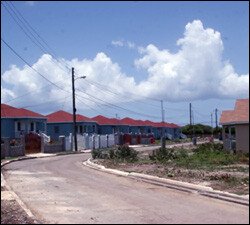 The Nevis Reformation Party (NRP) Administration reiterated its ongoing commitment to providing quality, affordable homes under its home ownership program.  Premier of Nevis, Hon. Joseph Parry made the announcement during a public meeting in Gingerland on Wednesday night.

The Hon. Joseph Parry, who is seeking a renewal of his party’s mandate, has built over 300 homes during the past 5 years.  This is compared to the 112 homes built by the former Concerned Citizens Movement (CCM).

The Premier announced that the NRP, in its 2006 Manifesto, said they understood “the far-reaching benefits of affordable home ownership and the impact owning a home can make on someone’s life.”

The quality of the homes built for and provided to residents of Nevis is important to establishing a comfortable lifestyle; and every parish in Nevis received new homes, including areas such as Maddens, Shaws Road, Jessups and Stoney Grove.

According to the Premier, during the previous CCM administration, people who purchased homes had to take out additional loans for the tiling, cabinets and closet space of those homes.

“We in the NRP have made home ownership a one-shot deal. As the person purchasing the house receives a fully painted and complete house at very reasonable rates.  All one has to do when they receive their keys is move in their furniture,” said the Premier.

The Premier concluded that he is proud that his Administration has made it their business to provide home ownership at affordable prices “ensuring that Nevisians have a chance at owning a piece of the rock.”