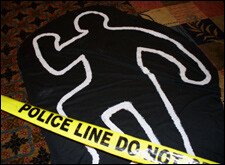 This Is The Second Murder In 7 Days In St. Kitts – Nevis

On Thursday 7th January 2010 police on Nevis responded to a report of a shooting which occurred at Crosses Alley, Nevis at about 8:50 pm. Investigations revealed that a 23 years young man Kimoy Powell of Central Basseterre, St. Kitts but resides at Bath Village, Nevis was found lying on the ground in a pool of blood with what appeared to be gunshot injuries to the body.

He was taken to the Alexandra Hospital by the EMS Ambulance and was pronounced dead on arrival by Dr. Shankur. An autopsy will be performed later to determine the cause of death. No one has been arrested in connection with this matter. Inveswtigations are ongoing.