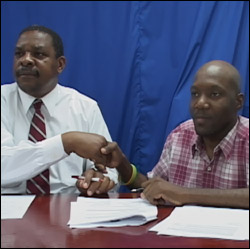 HIV/AIDS awareness in St. Kitts and Nevis was injected with new energies as the CARICOM Youth Ambassadors unveiled the latest initiative designed to encourage behavioural change through informed decision making.

A media launch for the project called “The More You Know” was held at Government Headquarters on Tuesday, and was attended by representatives from the Ministries of Health and Youth as well as an official from the CARICOM Secretariat in Guyana.

St. Kitts and Nevis’ male CARICOM Youth Ambassador Ian Richards gave an outline of the project which is divided into two phases. Phase I is dubbed “Get Tested.” This features the use of a televised Public Service Announcement (PSA) designed to encourage persons to find out their HIV status by having a test done. It uses a creative and up-tempo mix of local photo images and video footage of HIV/AIDS related activities to draw and maintain viewer interest. The declaration of a diverse number of persons from the local community who state “I did it” and ends with “So you can do it too” conveys an effective message as much of the imagery is taken from an HIV/AIDS Voluntary Counseling and Testing event.

Richards indicated that the PSA has tested well with audiences during private screenings “We have received a lot of positive feedback for this PSA and we are excited by the possibilities,” he revealed.

The PSA will be aired on ZIZ Television and the Cable in St. Kitts and on the Information Channel and GIS in Nevis for a minimum of six months.

Phase 2 targets high school students and engages the young people in a very youth-friendly and interactive way. A quiz competition dubbed the “Let’s See What You Know ““ HIV/AIDS Game Show” will be contested by two students from each of the five public high schools on St. Kitts. The format will be a television game show-styled concept with categories and an ascending point reward system much like the TV programme Jeopardy.

The preliminary round for the quiz competition is schedule for June 27, while the finals takes place one week later on July 4.

Director of Youth Geoffrey Hanley praised the imagination that went into the project design. “This project is unique and is one that young people will catch on to,” he noted. “We cannot provide too much information when it comes to HIV/AIDS and this unique way of presenting it “¦ is a good way to address the challenges we are currently facing.”

The director stated that the project was conceived with emphasis on young people and as such encouraged youth to embrace and “participate in their own activity.”

Sherwin Bridgewater of the CARICOM Secretariat stated that it is always good to be in St. Kitts and Nevis, and the launch of “The More You Know” project makes the occasion even more special. He stressed that the local CARICOM Youth Ambassadors have a reputation for delivering high quality initiatives that positively impact the youth population. Bridgewater said youth participation was important as was recently recognized during a recent Pan Caribbean Partnership Against HIV/AIDS (PANCAP) meeting in Jamaica.

“I know several countries were clamouring to ensure that there was maximum youth involvement “¦ in the fight against HIV/AIDS. It is good to see that it is now becoming a practical example again in St. Kitts and Nevis where the AIDS programme is collaborating with young people,” he said. “Sometimes, especially when you are in the field of HIV/AIDS, the news is not always good news and when you get good news you must really celebrate it and I am really glad that we are doing this, at this point in time.”

At the close of the media launch, CYA Richards and Permanent Secretary in the Ministry of Health Elvis Newton signed a contract which provides EC $13,500.00 for the funding of the project. The United Nations Population Fund (UNFPA) has also committed EC $5,400.00 in support of “The More You Know” project