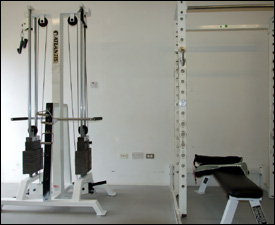 Some Of The Donated Gym Equipment

The Silver Jubilee Athletic Stadium has been outfitted with gym equipment and a new ice tub thanks to a donation from Athletics Canada ““ the sport governing body for track and field in Canada.

A handing over ceremony was held at the stadium on Saturday (January 14) where the Minister of Sports Honourable Glenn Phillip was joined by Carla Nicholls and Carolyn Taylor of Athletics Canada to cut the ribbon to open the new facilities.

The visiting officials are here as part of an athletic delegation that journey to St. Kitts and Nevis every year to train at the track and field stadium. The annual visits, which first began in 2008, are organised by expatriate Desai Williams, who now is officially employed by Athletics Canada.

The Head Coach of Athletics Canada, Alex Gardiner, explained that St. Kitts and Nevis is a very special place for the organization.

“We know that the conditions here are world class,” he emphasized. “”¦ We have an opportunity to train at unrestricted times, with a superior hotel (to stay at) and superior nutrition (food). These are elements that are absolutely fundamental and essential to world class performance.”

Mr. Gardiner cited the upcoming 2012 Summer Olympic Games and added that “this is the year when we (Athletics Canada) “¦ try to hit the podium and with your help the road is going to be that much easier.”

Minister Phillip saluted Desai Williams for his efforts in bringing the twin-island Federation and Canada closer in track and field. He noted that local athletes stand to benefit greatly from this donation, as they can “train the right way” at the Silver Jubilee Stadium, under the watchful eyes of coaches and officials of the St. Kitts-Nevis Amateur Athletic Association (SKNAAA) rather than at a local gym.

The Minister of Sport disclosed that the trust and confidence that Athletics Canada demonstrates in local authorities is testament to the hard work and vision of the Government and partner agencies such as the SKNAAA and local Olympic Committee, to ensure that sports development and sports tourism have a greater contributing impact on national development.

SKNAAA President Glen Jeffers also expressed gratitude to Athletics Canada for the donation which will help with the training and rehab of athletes. He added that the new equipment represents a significant step forward in moving the stadium to a “high performance center.”