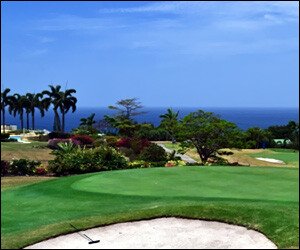 Sports tourism remains one of the areas that Tourism Minister, Honourable Lindsay Grant, is working on improving and work has already begun in that field. The minister, addressing a question from a caller to the government’s weekly radio program “Working For You,” disclosed plans that the government has been engaged in promoting sports tourism, including bring sporting events to St. Kitts – Nevis.

“I was just in London I think two weeks ago and signed a contract with the Barmy Army Cricket Club but they have a golf portion and they have about 4000 members and so they are going to bring the first tour here next year and they have advised me that they are going to bring about 120 persons on that tour. So if the Barmy Army comes next year with 120 persons, then that would be a good start for the contract we signed two weeks ago,” Minister Grant said.

The Barmy Army is the UK’s largest and most successful organization aimed at helping cricket fans watch and support the England cricket team both at home and abroad, according to information on the organization’s website.

The Barmy Army was started by three friends on the England 1994/95 Ashes tour of Australia. For the past twenty years, the Barmy Army have been supporting the England cricket team all over the world, bringing its unique carnival atmosphere and songs to the game.

Additionally, Minister Grant noted that about two months ago, he signed a contract with the Golf Association of Canada who is also about to start a programme with St. Kitts and Nevis next year bringing some 300 persons with their families, beginning the creation of a niche market for golf in St. Kitts. He pointed out that in Canada for instance, there are about six million golfers who spend on average $4.6 million overseas annually and St. Kitts is aiming to capture some of that market. The minister, however was keen to point out that St. Kitts will not be able to capture the golf destination unless it gets two other golf courses up and running, including the Irie Fields Golf Course at Kittitian Hill and the Tom Fazio Golf Course in Christophe Harbour.