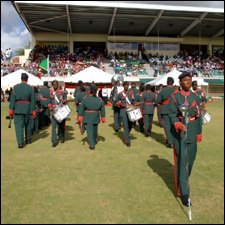 This year’s 28th anniversary of Independence will be celebrated under the theme “Preserving our Heritage: Self Respect, Tolerance and Compassion.”

A number of events have been organised to celebrate the occasion.

These include The Prime Minister’s Lecture Series on Wednesday, September 14th 2011 at the Old Boy’s School on Victoria Road and Seaton Street at 8:00 p.m.

The Wreath Laying and Ceremony and Guard of Honor in celebration of our First National Hero and Father of Independence, The Right Excellency Sir Robert Llewellyn Bradshaw at the Robert L. Bradshaw Memorial Park in St. Paul’s Friday, 16th  2011 at 9:00 am, followed by the Annual Community Awards.

The State Service of Thanksgiving on Sunday 18th  September at the Wesley Methodist Church on Seaton Street at 6:00 p.m. and the Ceremonial Parade on Monday September 19th at the Warner Park Cricket Stadium at 8:00 a.m.