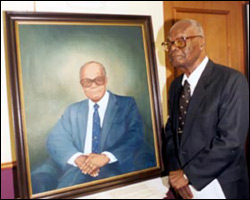 St. Kitts and Nevis‘ Prime Minister Hon. Dr. Denzil L. Douglas has describes the late former Governor of the Eastern Caribbean Central Bank, Sir Cecil Jacobs, as one who executed his work with diligence and encouraged others to perform at their highest levels of excellence.

“Our nation and the Governments and people of the Eastern Caribbean can only express sincere thanks to Lady Ann Jacobs for the tremendous support that she gave to him. Indeed, we shall miss him, but shall remember him in our hearts. Today, the Sir Cecil Jacobs Auditorium stands as a fitting memorial, one that provides an important venue for the meeting of minds, the exchange of ideas, the nurturing of culture, and indeed, the recognition of his contribution to the development of the Bank and member countries of the Eastern Caribbean Currency Union,” said Prime Minister Douglas at Tuesday’s funeral service to celebrate the life of this outstanding Son of the Soil.

Reflecting on the life of Sir Cecil, Prime Minister Douglas pointed out that he served St. Kitts and Nevis and the Caribbean with a sense of purpose.

“Sir Cecil forged for himself an illustrious career, which he began as a Civil Servant in the Treasury of St. Kitts, Nevis (and Anguilla) and he later was employed in the service of the Government of St. Vincent and the Grenadines. These experiences together with his professional qualifications provided the sound foundation he needed when he became Managing Director of the then East Caribbean Currency Authority in 1973,” said Dr. Douglas.

He said that it was during those years that his greatest contribution to regional development took shape and Sir Cecil played important roles in the development and transformation of the East Caribbean Currency Authority into the Eastern Caribbean Central Bank in 1983.

“He was appointed as the first Governor of the ECCB and held that position until his retirement in 1989. It is of note, also, that his extensive experience was of tremendous value in the development of the Financial Sector in St. Kitts and Nevis. Indeed, the ECCB member countries benefitted well under the guidance and direction of Sir Cecil,” said Prime Minister Douglas.

The Prime Minister recalled “very vividly the meeting of the Cabinet of Ministers, which I presided over in taking the decision to recommend him to His Excellency for consideration by Her Majesty for appropriate honours, and as a result his contribution to his country and his influence on the sub-region were recognised in his knighthood by Her Majesty Queen Elizabeth II, in 2002.”