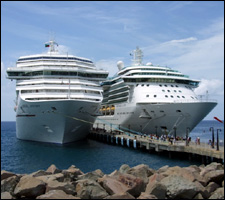 Hundreds of cruise passengers streamed off the “Serenade of the Seas” and the “Carnival Victory” on Friday.

It was the first time that two cruise ships berth at St. Kitts’ Port Zante at the same during the summer.

The 2,501-passenger capacity “Serenade” arrived from CuraÃ§ao with 2,461 passengers and a crew of 865 and is scheduled to sail early evening for the United States Virgin Islands.

The 3,050-passenger capacity “Carnival Victory” arrived from St. Lucia with 3,359 passengers and a crew of 1042 and sails later from the United States Virgin Islands.

Both the “Serenade of the Seas” and the “Carnival Victory” are visiting St. Kitts during the summer making year-round calls to this destination.

“Serenade of the Seas” and “Carnival’s Victory” will make a total of 31 calls during the off-season bringing an estimated 88,000 passengers to St. Kitts.

Cruise visitor arrivals in St. Kitts are expected to increase by more than 20% in the upcoming October 2011 – September 2012 cruise ship season.

Senator the Hon. Richard “Ricky” Skerritt, Minister of Tourism and International Transport  said it is a significant achievement for St. Kitts to be able to forecast a fifth consecutive year of arrivals growth for the upcoming season.

He disclosed from the bookings it is projected that more than 650,000 visitors will arrive by September 2012.