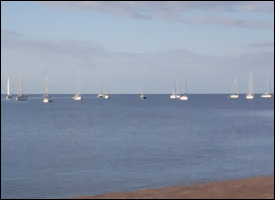 Figures from the St. Christopher Air and Sea Ports Authority (SCASPA) a triple increase in yacht arrivals and a double increase in passengers aboard yachts for the first three months of this year compared to the same period in 2011.

SCASPA’s Statistics Department reported 267 yachts dropped anchor in the first three months of this year compared to 83 in the same period in 2011, an increase of 222 percent. In January 47 yachts arrived, 155 visited in February and 65 in March. 90 yachts visited for the same period in 2010.

510 passengers were aboard the 267 yachts in the first three months of this year, registering a 40 percent increase compared 363 for the same period in 2011. There were 125 yacht passengers in January, 267 in February and 118 in March. SCASPA recorded 108 passenger arrivals on board yachts in 2010.

Minister of Tourism and International Transport, Sen. the Hon. Richard ” Ricky “ Skerritt said rececently that the yachting landscape in St. Kitts and Nevis will change dramatically over the next few years.

“Yachting is a lucrative economic sector in other neighbouring Caribbean jurisdictions and has been identified as a key component of the strategy for future growth of our tourism development,” Mr. Skerritt told a consultation aimed at establishing a maritime policy and action plan.

He expressed confidence that the establishment of the private jet terminal now under construction at the Robert L. Bradshaw International Airport, together with the ongoing construction of new world-class marina facilities at Christophe Harbour, and a further expansion of the Port Zante marina, coupled with the modernisation of yacht entry and clearance administration, will help to significantly propel our destination forward in this sector.

“It is our Government’s intention to build a positive environment for growth of the yachting sector, and for the overall development of our maritime and marine sectors.

A Maritime Policy and Action Plan will be an important and timely step in the right direction,” Minister Skerritt said.

The World Tourism Organisation (WTO) defines a yachting tourist as a person who stays for more than 24 hours but less than twelve months in a particular country outside his or her usual place of residence and whose place of stay is a vessel for most of their stay.

Yachting establishments are those enterprises that cater uniquely or mostly to yachtsmen, and include charter boat companies, marinas and ancillary marine services, such as sail-making, engine repair, marine electronics and out-haul facilities.

The distinction between direct and indirect recipients can be blurred. Many yachting establishments, such as marinas and ancillary services, provide goods and services directly to yachtsmen, as well as to other yachting establishments such as charter boat companies and, further confounding the problem, to non-yachting residents and other tourists as well.