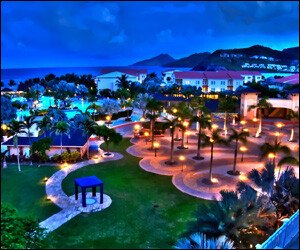 St. Kitts and Nevis will grow its hotel room stock by 50% within the next 24 months, Minister of Tourism, Honourable Lindsay Grant has disclosed.

The current hotel stock of St. Kitts and Nevis stands at about 1300 rooms, 1000 in St. Kitts and 300 in Nevis. Speaking on the government’s weekly radio program “Working for You” on October 14, Mr. Grant listed a number of new hotels that are coming on stream within the next two years including the Park Hyatt Hotel, the Embassy Suites, Radisson and Koi Resorts. The Park Hyatt Hotel, he noted, being constructed in Banana Bay, is the first and only Park Hyatt Brand hotel in the Caribbean. The Park Hyatt is scheduled to be opened in September 2016, adding 136 rooms to the hotel stock of St. Kitts and Nevis. Koi Resorts is expected to contribute another 226 rooms when it opens in the latter part of 2017. A similar number of rooms will also come through the construction of the Radisson Hotel, some 226. The Embassy Suites is also expected to open in 2017.

Meanwhile, the minister lamented that the People Empowerment Program (PEP), implemented by the previous administration, has not done enough to train persons to fill positions in the tourism sector, especially to fill the new stock of rooms coming on stream. Mr. Grant was responding to a concern raised by a caller on the radio program about the PEP and he said the PEP would be reformed to address this demand.