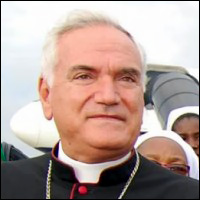 The Most Reverend Archbishop Nicola Girasoli, Apostolic Nuncio-designate of the Holy See to St. Kitts and Nevis next week to present his credentials to the Governor General His Excellency Dr. Sir Cuthbert Sebastian.

Archbishop Girasoli, who arrives on Monday, is expected to pay a courtesy call on Deputy Prime Minister and Minister of Foreign Affairs, the Hon. Sam Condor on Monday afternoon.

On Tuesday morning, he meets with Minister of Ecclesiastical Affairs, the Hon. Marcella Liburd before going to Government House to present his credentials to the Governor General.

The Representative of the Pope is also expected to travel Nevis and meet with Acting Premier of Nevis, the Hon. Hensley Daniel.

He will also meet with the Leader of the Opposition in the National Assembly, the Hon. Mark Brantley.

He was educated in Philosophical and Theological formation at the Pontificio Seminario Regionale of  Molfetta (Province of Bari).

He obtained his Master Degree on Moral Theology at the Pontifical Gregorian University in Rome in June 1981.

That same year, he joined the Pontificia Accademia Ecclesiastica (Vatican Diplomatic School) and he accomplished his studies in 1985, achieving also a Doctorate (PhD) in Canon Law at the Pontifical Gregorian University.

He was ordained Bishop on March 11th, 2006 in Ruvo (Bari) and from 2006-2011 Apostolic Nuncio- Holy See-Vatican Ambassador to Zambia and Malawi.

On 29th October 2011, he was appointed Apostolic Nuncio and Vatican Ambassador to Trinidad and Tobago, Antigua and Barbuda, Bahamas, Barbados, Dominica, Jamaica, Grenada, St. Kitts and Nevis, St. Lucia, St. Vincent and the Grenadines, Suriname, Guyana and Apostolic Delegate in the Antilles.

Archbishop Girasoli speaks fluently English, French and Spanish, and has a good knowledge of German and has published several studies on minority rights.