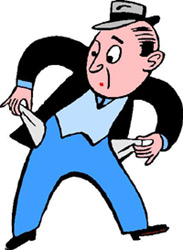 Where Did The Money Go?

The residents of the federation are outraged after being asked to make further adjustments due to yet another increase in taxes.

Minister of Tourism Hon. Richard Skerritt moved to have passed the necessary legislation to effect the tax increase in the form of amendments to the Island Enhancement Fund and the St. Christopher Air and Sea Ports Authority Act

“The Denzil Douglas led Administration continues to demonstrate that it has lost touch with the feelings of the common man,” said People’s Action Movement Deputy Political Leader Hon. Eugene Hamilton. “Bills  taxes continue to be introduced and increased at alarming rates. In November 2010 the VAT was introduced at 17%, In February of 2011 electricity rates were increased by 85% and the latest is that Departure tax will be increased by 100% by July 2011. This is outrageous and people are suffering and the government seem not  to have a hint as to the hardships poor people are facing due to these plethora of new and raised taxes, Hamilton continued.

This increase in departure tax  will see persons between the ages of 2-12 now paying EC$100, possible laying off of those working directly with collection of such tax, and monies being paid to an external company for collection of the new tax.

MP Hamilton continued “The strategy of taxing more and more is not working. The national debt continues to rise and the people of the federation see no relief comfort after paying significantly more in taxes. The People’s Action Movement will put in place prudent and appropriate measures particularly in the control of Government spending and a decrease in the cost of living.

“It is time for the present administration to step down before the situation gets worse. We need good governance Now.”