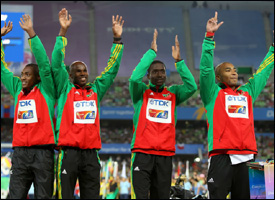 Members of team St. Kitts and Nevis that contested the IAAF 2011 World Championships in Athletics held in Daegu, Korea will be welcomed home on Tuesday, fresh off their bronze medal winning performance in the Men’s 4×100 meter Relay.

SKNIS has been informed that a delegation headed by the Minister of Sports Honourable Glenn Phillip, will join with officials of the St. Kitts-Nevis Amateur Athletic Association (SKNAAA) to greet Antoine Adams, Delwayne Delaney and Jason Rogers upon their return to the Federation. The other team members including Sprint Icon Kim Collins, who days before had won a bronze medal in the 100 meter finals at the same event, and Brijesh Lawrence, who anchored the relay, will return home at a later date.

On Sunday morning, Minister Phillip commended the team after their sterling performance.

“On behalf of the Government and people of St. Kitts and Nevis, I wish to extend congratulations to the athletes, coaches and officials that participated in Daegu 2011. The Federation is extremely thrilled and proud of the hard work and dedication exhibited by the team during the August 27 to September 04 Championships,” he stated.

“The success of the Relay team bears testimony to what can be accomplished when persons work towards achieving a common goal with a spirit of unity, perseverance, discipline and national pride. These characteristics are some of the key ingredients that fueled the impressive performance of these exceptional athletes who represented the smallest independent nation in the Western Hemisphere on one of the biggest stages in the world of sports.”

Minister Phillip reaffirmed Government’s commitment to continue investing in the development of local athletes and the sporting infrastructure.

The welcome ceremony for Adams, Delaney and Rogers will be held at the VIP Lounge at the Robert L. Bradshaw International Airport. An official celebratory event will be held for the entire team upon the return of Lawrence and Collins.