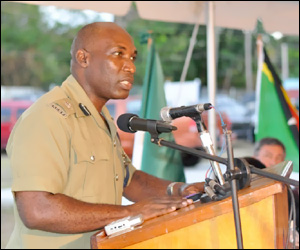 Two students from Windsor University are home safe, having been rescued by security personnel, after becoming lost during a hike to the volcanic crater of Mount Liamigua.

Police reports indicate that Marco Thiery and Uzair Ali set off on the hike on at 11:00 a.m. on Saturday (August 16), unaccompanied by a guide. Around 4:30 p.m., the students realized that they were far from their objective of reaching the top and decided to turn back given that it would have been dark in a few hours. However, the students became confused and descended into a ghaut. Some 30 feet from the base of the ghaut, it became obvious that they lost all sense of direction and visibility was reduced due to fog.

At 5:30 p.m. the call for assistance was placed to the emergency line and was passed to the Dieppe Bay Police Station. Commander of Division of the Royal St. Christopher and Nevis Police Force Superintendent Cromwell Henry said a search party led by Sergeant Carleen Phipps was formed that also included members of the St. Kitts-Nevis Defence Force and two civilian guides familiar with the area.

The police instructed the Windsor students to use the Global Positioning System (GPS) feature on their smartphone to provide their coordinates. After utilizing satellite services available on Google Map coupled with traditional maps of the area the search and rescue party left at about 6:00 p.m.

It took hours to navigate the rough terrain which was complicated by the dark of night and the thick of the fog. The authorities were careful to ensure all members of the party were safe during the trek and at approximately 1:00 a.m. on Sunday (August 17) the students were located.

Given the conditions, the authorities decided that it would have been too dangerous to descend from the mountain and made camp with sentries deployed to keep the civilians safe. At first light, the rescue party began the journey back and returned to the Dieppe Bay Police Station at about 8:00 a.m. The Windsor students were examined by medics from the St. Kitts-Nevis Fire and Rescue Services. With only a few bruises and scratches, the students declined the option to be checked out at the Joseph N. France General Hospital.

Superintendent Henry stressed that Sergeant Phipps was well prepared to lead the operation given her recent training with the Regional Security Service (RSS) which included components in jungle operations. He advised persons planning on taking similar hikes to engage the services of a local tour guide and to notify the nearest police station as to the route in the event of any unexpected incidents.