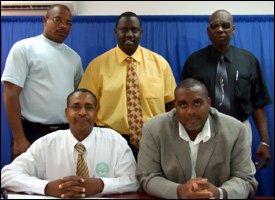 Commissioner of Culture, Sport and Youth Affairs in French St. Martin, Jean David Richardson, has officially apologized to the Government and people of St. Kitts and Nevis for an incident that occurred on July 17, 2009, when a visiting Under 17 and Under 15 football team was attacked by players and fans from the French territory.

Commissioner Richardson led a five-man delegation to St. Kitts on July 28, to meet with senior Government officials including Deputy Prime Minister and Minister of Youth, Honourable Sam Condor, and Minister of State for Sports, Honourable Richard Skerritt. Discussions were also held with representatives from the local football association, parents and other stakeholders. The visiting delegation included Lou Baley, the Managing Director of Sports; GrÃ©goire Dumel of the Tourism Authority; Antoine Hunt, the organizer of the competition in which the St. Kitts teams participated; and concerned citizen Victor Paine.

During an SKNIS interview, Commissioner Richardson said that the delegation intended to visit the twin-island Federation prior to July 28, but was forced to alter plans due to the ongoing issues within the regional carrier, LIAT. He noted that the bonds between St. Kitts and Nevis and St. Martin ran deep, which made the July 17 incident particularly troubling.

“My great, great grandfather is a Kittitian. I use to come here for vacation in my young days,” he explained. “It really hurt me personally as an individual, not just as a Government official, “¦ to see the incident. I would like to say especially to the [players and their] family; I don’t want them to have [any] animosity towards St. Martin people [because] of a couple of individuals that do not respect the civil laws of the land.”

“We as Government made a decision that everyone that was involved will be prosecuted. No stone will be left unturned,” stressed the Commissioner.

State and local authorities are currently investigating the matter and one arrest has reportedly been made to date.

The senior French official revealed that his Government has had personal contact with the players and their families in St. Kitts, and have agreed to cover all injury related costs.

He added that Government was not in charge of security for the tournament which was also contested by Guadeloupe and St. Maarten (Dutch). Authorities have since made a decision to provide security for all regional sporting, educational and cultural events to avoid a repeat of the incident.

“We want to reassure the population of St. Kitts that St. Martin people are not animals or savages. “¦ We always go out of the way to accommodate anyone that come to St. Martin and treat them as equals,” he stressed, adding that a “serious [illegal] immigration problem” have not diminished the territory’s hospitality.

The interview with the visiting delegation airs on next week’s edition of the SKNIS radio programme Perspectives.