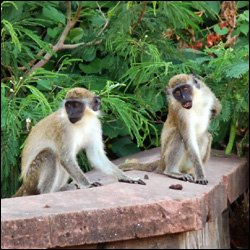 The Government has acquired the services of a Cuban expert to manage the growing threat of roving troupes of monkeys to the crops of farmers.

Dr. Cubillas, who holds a masters degree in animal science and has vast experience in primate population studies, is also expected to produce GIS maps showing distribution of monkeys on St. Kitts, management plans for reducing population and maintaining reduced population, facilitate meetings with staff, farmers and other interest groups to discuss findings, provide progress reports every three months and provide a detailed end of Mission report and a list of recommendation.

Mrs. Morton-Anthony said the implementation of the recommendations should lead to a significant reaction in crop damage and encroachment into residential areas.

Prior to his arrival meetings were held with representatives from research institutions, trappers, farmers and the Ministry.

The monkey population is said to be bigger than the human population.

4 thoughts on “Survey To Be Done About St. Kitts’ Monkey Population”