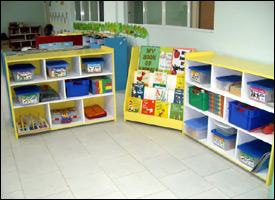 Basseterre-based Ambassador of the Republic of China on Taiwan, His Excellency Mr. Rong Chuan Wu is impressed with the soon to be opened Challengers Multi-Purpose Centre and said it will play an important role in the development of the future leaders of the community.

Ambassador Wu, who accompanied St. Kitts and Nevis’ Prime Minister Hon. Dr. Denzil L. Douglas, Deputy Prime Minister Hon. Sam Condor, Minister of Public Works, Dr. the Hon. Earl Asim Martin and other government officials on a tour of the two-storey facility on Friday said Taiwan was happy to share and contribute to the development of the infrastructure in the twin-island Federation.

“This building is not only for day care and pre-school, but also for meetings of the community residents and (staging of) cultural events. I believe that this building will be fully utilised for leisure and sporting activities,” said Ambassador Wu.

Day Care and pre-school facilities will be housed on the ground floor. “It is a first-class facility that will begin the formal development of the child from sleeping, eating, teaching and recreation,” said Ambassador Wu, who further pointed to the seriousness of parents about their children’s education.