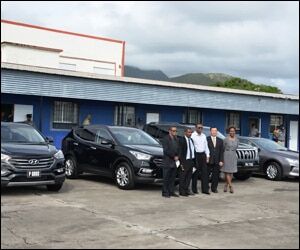 The Government of St. Kitts and Nevis welcomes the efforts of Taiwan to strengthen bilateral relations with the Federation, said The Honourable Mark Brantley, Deputy Premier of Nevis and Federal Minister of Foreign Affairs and Aviation, during the handing over of a fleet of vehicles on Monday, December 28, at the Police Training Complex in Basseterre.

The vehicles are earmarked for use by officials of the Office of the Prime Minister, the Ministry of National Security and the Ministry of Foreign Affairs. Minister Brantley described the relationship between both countries as fruitful.

“The Federation of St. Kitts and Nevis is most grateful for the provision of four new vehicles,” he said. “These vehicles would be used to execute exemplary protocol services to our visitors of state and to perform other major operational functions of the ministries.”

The foreign minister stated that his fellow citizens value Taiwan’s contribution to the overall development of the twin-island Federation.

“2015 has been a successful year for both of our countries,” said Minister Brantley. “The assistance rendered and expertise shared by your Government in the field of education, trade, occasional training, agriculture, technology, energy, health, tourism and culture, social amenities and infrastructure and now security, have served to safeguard the welfare of our people.”

Minister Brantley assured the Taiwanese Government and His Excellency George Gow Wei Chiou, Resident Ambassador of Taiwan to St. Kitts and Nevis, that the Government of National Unity would continue to strengthen the ties between both countries and remain deeply committed to the relationship.

His Excellency Chiou said that the vehicles are of significant importance “because without the proper vehicles it is impossible to function very well.” He noted that in early 2016 two police officers will be sent to Taiwan for a short visit to familiarize themselves with operations there.

The Ambassador explained that the Government of Taiwan is hopeful that it can help to prevent criminal incidents, preserve security and promote the goodwill of the citizens and residents alike.