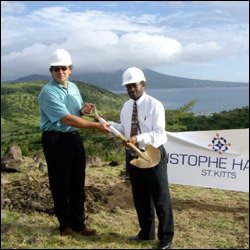 A British writer is asking: “Is St. Kitts The Next Millionaires’ Playground?”

Jenny Knight,  writing in one of Britain’s  leading newspapers, the Daily Express noted that St. Kitts “a paradise of verdant hills, sandy coves and turquoise sea is about to be turned into a luxury holiday hot spot called Christophe Harbour, but you can still snap up a good deal on this Caribbean island.”

The full report follows: Ecologists may shudder but most residents on the Caribbean island of St. Kitts welcome developments to attract the rich and bring new jobs.

Just a few, like engineer Austin Clarke, who recently returned after 20 years in England, have mixed feelings.

“I’d prefer to see small-scale eco-tourism converting the old sugar estates rather than more building on the coast,” he says.

Christophe Harbour, a 2,500-acre site on the south-east peninsula, is destined to be transformed by marinas; a challenging Tom Fazio golf course, multimillion-dollar villas and artificial islands with chi-chi shops and restaurants.

Developer Kiawah established its green credentials in South Carolina where homeowners coexist with alligators, turtles and migrating birds. To get top prices for plots and homes at Christophe Harbour Kiawah promises a low-density development that preserves the area’s natural beauty.

St. Kitts and the neighbouring island Nevis had to reinvent themselves as a tourist destination after sugar farming was abandoned in 2005. The 500-room Marriott hotel opened on St. Kitts and upmarket developments were built for second homeowners and retirees from the UK, US and Canada.