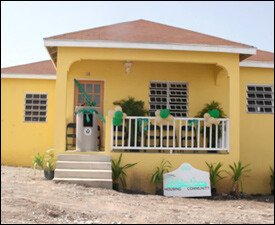 An Example of Affordable Nevis Homes

“Provision of housing under the Nevis Reformation Party (NRP)-led Nevis Island Administration, has been a major accomplishment”, said Premier of Nevis the Hon. Joseph Parry. He made the statement on Nevis Television- (NTV) 8 program “Government in Action” hosted by Mr. Walter Morton, Wednesday night.

Under the housing programmes put together by the NIA, a number of Nevisians have been afforded the opportunity to buy a home and land.

Premier Parry said $25 million had been put into the development of seven housing communities across Nevis with a total of 248 homes.

In addition, a Civil Servants Mortgage loan programme was ongoing.  The programme commenced with an initial amount of $10 million, which was provided by the Social Security Board.  Due to a high demand for homes [in excess of   1,000] an added $5 million was allocated in 2009.

Almost 70 civil servants and non-established workers have so far benefitted from the loan programme which has allowed for new construction, renovation of property, property purchase and refinancing of existing mortgages.  A total of $13, 280, 226 has so far been approved in loans.

During his address, the Premier commended the tradespersons and the Nevis Housing and Land Development Corporation for their commitment which ensured that the houses were modern and elegant.

Meanwhile, during the budget debate last Wednesday, House representative for the St. Georges Constituency and leader of the Opposition party in Nevis, the Concerned Citizens Movement (CCM),  Hon. Vance Amory, stated that the houses built under the NRP were too expensive and were being stockpiled.

He further explained that there were more requests for houses from Nevisian residents than the Nevis Reformation Party led Administration could complete. In addition, houses constructed under his Administration’s Affordable Housing Project contained closets, cupboards and full bathrooms that were tiled and painted.  “Once someone purchased one, it was only necessary to take one loan and move in their furniture.   Unlike housing under the previous administration, a loan was taken for the house, tiles, cupboards and closets among other necessities”, the Premier added.

“My NRP government has had a history of bringing affordable homes to Nevis in the past and we will continue the practice for the future,” concluded Premier Parry.