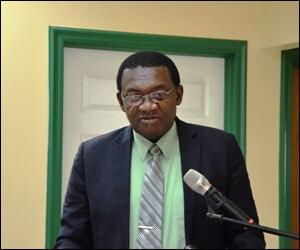 Minister of Agriculture the Honourable Eugene Hamilton, said there is a lot of work to be done in agriculture to mitigate against threats posed by drought and other climate related hazards.

At the Annual Review and Planning Meeting on Tuesday, February 23, at the Department of Agriculture Conference Room, the minister stated that it was important to look back at past developments in order to plan for future success.

“As we evaluate the plan, we look forward to 2016 and the programmes for implementation and the possible outcomes as a result of those programmes,” said the minister.

Looking back at 2015, the agriculture minister reflected on the significant impact the drought had on the Federation, in particular agriculturists.

“It was only two or three years ago that we were blessed with rainfall of about 79 percent or so inches,” he said, while noting that the recorded rainfall for 2015 had dropped to 27.6 inches. “We experienced a 66 percent loss in rainfall and of course the expert’s projection for 2016 and 2017 seem very dim, so that the farmers who suffered tremendously last year as a result of lack of water may have a very difficult time again this year and the next.”

Minister Hamilton said that the ministry took initiatives to remedy the problem.

“We have tried to mitigate that overtime. We have built twelve dams with the support of our allied partners from the Agriculture Resource Management Project,” said Minister Hamilton. “It is true however, that of the twelve dams that have been built, six of them are now damaged. That means we have a lot of work to do.”

He explained that the water harvested from the dams is used to boost the crop production which suffered severely during the years when there was a decline in rainfall.

The minister urged the farmers to use the water harvested wisely through drip irrigation. By practicing this, “it can go a long way in keeping the capacity at a satisfactory level.”