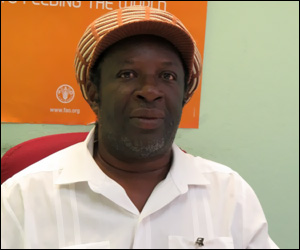 The recently-held Agriculture Open Day is a celebration of a strong agricultural programme with linkages to the tourism sector and a continued advancement in farm technology such as hydroponics.

Acting Permanent Secretary in the Ministry of Agriculture, Mr. Ashton Stanley said kept promises on behalf of the Government of St. Kitts and Nevis to invest more time, resources and finances in agricultural development and to link production to local the tourism industry, consumer demands and consumption trends are also cause for celebration.

“Supporting the Farm to Fork approach for better livelihoods and healthier eating, showing our commitment to monkey control through support to monkey trappers, continually addressing pest and plant based diseases with the new Coconut Replanting Project. Agriculture Open Day 2014 is therefore a great celebration of all that we have accomplished and will continue to accomplish as we move forward in the right direction,” Mr. Stanley said during the recent opening day.

He said too that the Open Day demonstrates to the general public that the Ministry is achieving its objective of food security, self-sufficiency and increasing linkages through export markets.

Mr. Stanley said Open Day has been such a great hit not only with the Ministry and the Private Sector, but also with farmers, who are of the view that it should be expanded into a National Exhibition, adding that the schools also look forward to the annual event which is testimony to the increasing youth consciousness and evidence that education and agriculture marry well in St. Kitts.

The senior agriculture official said this year’s open house comes at a time when the ministry can boast of a 15 percent increase in food crop.

“We have also celebrate the completion of a packing house, completion of the FAO US$20,000.00 Telefood projects for 12 Primary Schools, a 32% increase in mutton production and the upgrade of the local pig stock with the SIDF-sponsored importation of 40 Duroc pigs and 40 Yorkshire pigs.  Also worth celebrating is the collaboration with the Agriculture Resource Management Project (ARMP) also funded by the SIDF for the establishment of shade houses and dams, the renovation of the Basseterre Public Market, Upgrade of the Basseterre Abattoir, Commencement of FAO-funded US$170,000.00 TCP project for the commercialization of breadfruit and breadnut,” said Mr. Stanley.

Mr. Stanley said the two-day Agriculture Day had as its theme: “Agriculture: Moving in the Right Direction” and allows the Ministry and the Department to showcase the work done to promote agriculture and is also a part of the ministry’s profile.

“Students were able to understand from a hands-on approach, the work of farmers and the technology used to support increased production.  Farmers and fishers have put on show all the splendid bounty of a year’s hard work,” said Mr. Stanley who stressed that the event remains an integral aspect of the work profile of the ministry.

“Its main purpose is the showcase and demonstration of new crop varieties; marketing of root crops and vegetables; marketing of Value Added Products; Display of new breed of animals; display of veterinarian equipment; promotion of the different units within the Department of Agriculture such as quarantine, propagation, engineering, communication and extension.