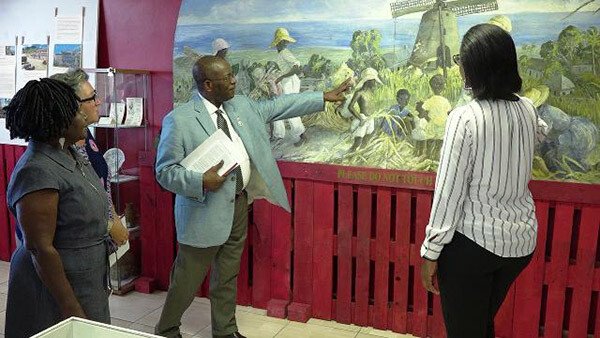 Dr. Everson Hull, St. Kitts and Nevis’ Ambassador and Permanent Representative to the Organization of American States in Washington, D.C., says he is working on enhancing the recent upgrades done by the Nevis Historical and Conservation Society (NHCS) at the Alexander Hamilton Museum.

The SKN diplomat made the disclosure during a tour of the museum on January 07, 2020, ahead of the 263rd birthday celebration of Alexander Hamilton, an American Statesman who was born on Nevis on January 11, 1757.

“My intent is to learn a little bit more about what has actually been put in place and to proceed with respect to exploring possibilities of increased funding for elaborating on the museum, enhancing the museum.

“We have great ideas in mind with respect to not only broadening its scope and certainly emphasising the rich historical legacy of Alexander Hamilton, the place of his birth, and actually having within the museum perhaps a movie theatre, a café, a gift shop and certainly a sculpture of Hamilton in the courtyard. We think that these are some of the assets that would be very, very important to enhancing the legacy of Hamilton,” he said.

Dr. Hull commended the Nevis Historical and Conservation Society for its efforts at revamping the museum over the years and expressed satisfaction with his experience there during his visit.

“I am very much impressed with what has been done here over the last several years. The portfolio of exhibits has expanded a great deal and I know that the renovations that have taken place under the leadership of Mr. Richard Lupinacci, those are very, very important in terms of actually broadening the experiences that the visitors from around the world can see when they come to visit the museum,” he said.

“I will be at that event as I do each year, to actually sing the national anthem and actually sing the birthday song with the folks here at the historical society. We will sing that song lustily not only to the folks who are here in Nevis for the tea party that’s being held but also with members of the Alexander Hamilton Awareness Society who will be at that event at Trinity Church in Manhattan, so too will be members of the US Coast Guard.

“As many of you know, Hamilton was instrumental in founding the Coast Guard and that is a very important achievement so the Coast Guard will be very much there, we will be there also.

A declaration or proclamation will be drafted by the Premier of Nevis which I will read that proclamation before the audience that is assembled there,” he said.

Meantime on Nevis, the NHCS will host its annual Alexander Hamilton Tea Party at the museum’s grounds to mark the birthday anniversary. It is also a special event to announce winners of the Hamilton Scholarship Awards.

Alexander Hamilton was one of the original members of the continental congress in Philadelphia, and he was chosen as the first Secretary of the United States Treasury. A brilliant economist, Hamilton was largely responsible for the federalist financial policies of the new nation. His opposition to Aaron Burr during the Presidential contest of 1800 undoubtedly contributed to the election of Burr’s rival, Thomas Jefferson; his renewed opposition to Burr in the 1804 campaign for the governorship of New York undoubtedly contributed to Burr’s issuance of a challenge to duel. Hamilton accepted: the two met at Weehawken Heights, NJ, on a bluff overlooking the Hudson River, and Hamilton was fatally wounded.