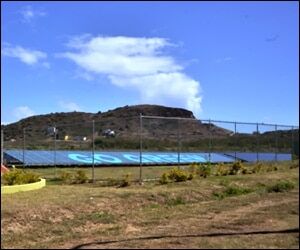 The Government of St. Kitts and Nevis will continue to partner with stakeholders in pursuing green pathways, specifically in the areas of solar, wind and geothermal energy where growth is observed to be strong and sustainable, said the Honourable Ian Patches Liburd, Minister with responsibility for Energy.

The minister made these remarks during the official launch of the Energy Balance Report (2010-2012) of St. Kitts and Nevis at the St. Kitts Marriott Resort on Thursday, March 31. He said that the Government is cognizant of the fact that renewable energy security is a simultaneous advancement of economic growth, environmental sustainability, poverty reduction and social inclusiveness.

Minister Liburd made brief mention of the signing of the Memorandum of Understanding between St. Kitts and Nevis and Teranov – a French engineering and services company for new and renewable energy based in Guadeloupe – for the development of geothermal energy in St. Kitts.

“Once the potential of a geothermal resource is established in St. Kitts we will then determine how best to develop that resource without retarding the progress on Nevis,” he said. “Just last week the Government of Taiwan officially handed over a solar farm, some 500 kilowatt.”  He noted that the commissioning of the new farm brings the total solar energy generation to some 1.25 megawatts in St. Kitts.

The Minister added that wind energy is presently being pursued and hopefully in the next couple of months the start of a five megawatt wind energy initiative in Belle Vue will be announced. He said the five megawatt farm will put the Federation far ahead as it relates to intermittent resources.

“The introduction of wind energy in 2010 in our sister island of Nevis was found to have positively influenced the electricity generation matrix thus resulting in a reduction in the consumption of diesel oil for the period 2010-2012,” he said. “As a government, we were therefore encouraged and continue to explore renewable energy alternatives also to diversify our energy matrix in all economic activities and sub-sectors.”

He further added that the Government recognized the importance of embarking on a three-pronged approach in dealing with the energy sector.

“We believe that there must be energy security in order to ensure sustainable development and economic growth in St. Kitts and Nevis,” said the energy minister. “We believe that there must be energy access, by that we mean that every citizen and resident must have access to affordable electricity irrespective of his/her social status. Given the various issues associated with climate change, we will at all times give high consideration to the energy environment.”