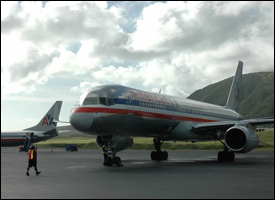 The Plane Is Here..Where Is The Luggage?
Photo By Erasmus Williams

The New York to St. Kitts flight was one of 25 American Airlines flights that ere delayed after the software that controls the baggage-sorting conveyor belt malfunctioned.

Flights were delayed from 60 to 90 minutes, according to the airline, and some bags were not loaded onto planes before scheduled departures. The airline said workers were sorting bags by hand.

The airline let passengers decide if they wanted to fly without their luggage, informing them that bags would be delivered to them at their destination.