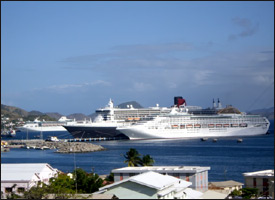 A few weeks after Celebrity Cruise Lines, announced that its newest ship, the 2,850-passenger Celebrity Solstice, will have St. Kitts – Nevis on its maiden voyage, the twin-island Federation is on the itinerary of another new Celebrity vessel.

Celebrity Solstice will embark on its maiden voyage in November this year and make three calls to St. Kitts before December 14th, the original date.

Now Celebrity Cruise Lines has announced that the 2,850-passenger Celebrity Equinox, which will be inaugurated on August 8, 2009 will have St. Kitts – Nevis on its 10- and 11-night “Ultimate Caribbean” cruises roundtrip out of Fort Lauderdale.

These will also feature stops at the ports of Charlotte Amalie, St. Thomas; Roseau, Dominica, Bridgetown, Barbados; Philipsburg, St. Maarten; Grand Cayman; Colombia; Costa Rica and Mexico. The 11-night itinerary includes a stop at Roatan, Honduras, which Celebrity has not visited since 2007.

The Celebrity Equinox will offer Celebrity Cruises’ signature standout service and dining, as well as a slate of new features unique to the Solstice class of ships. One of those is The Lawn Club, a half-acre on the top deck of the ship featuring real, growing grass, where guests can play croquet and bocce, practice their golf putting and picnic with wine and cheese. Like Celebrity Solstice, Celebrity Equinox also will feature the cruise industry’s only “Hot Glass Show” at sea, a dedicated glassblowing studio where The Corning Museum of Glass will present glassblowing demonstrations.

Celebrity’s current fleet will be joined by Celebrity Solstice in 2008, Celebrity Equinox in 2009, Celebrity Eclipse in 2010, and a fourth Solstice-class ship in 2011.

Celebrity Cruises says it is giving Caribbean cruise enthusiasts something to celebrate in late 2009 and early 2010. For the first time in five years, Celebrity will offer a range of Caribbean itineraries lasting a week or longer on five of its ships: Celebrity Constellation, Celebrity Equinox, Celebrity Mercury, Celebrity Solstice, and Celebrity Summit.

Together, the ships will call at 26 different ports during sailings ranging from seven to 14 nights, departing from Fort Lauderdale, Florida, and San Juan, Puerto Rico.