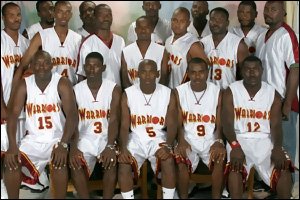 Basketball City will come alive this weekend when the St.Kitts Amateur Basketball Association (SKABA) will be hosting the Champion Basketball team from neighbouring Antigua & Barbuda. The two ti will arrive here on Friday and will engage local club teams in matches on Saturday and Sunday evenings. The visiting basketball team is the Antigua Defense Force Warriors who is the top ranked team in Antigua and the multiple time Antigua Barbuda Basketball Association Division 1 playoff champions. The team features some of Antigua’s top and national players including Marlon “Buju” Charles, Mario “Little” Davis,Shawn “Gizmo” Williams ,Kelvin “Shugy”Simon and Vivian “Boast” Destin.

On Saturday The Warriors will engage an all star team from the Challengers Community League in challengers. The team will then play Defending SKABA national champions Rams Hitters on Sunday as part of the official opening of the 2009 SKABA League.

According to officials of the Antigua team the players are keenly anxious to play their counterparts here on St.Kitts. According to coach Bradbury Browne the Warriors are looking forward to matching their skills against the St.Kitts Champions Hitters. Browne indicated that he was keen on viewing how well his team will match up against the top club in St.Kitts.

“I expect an exciting and keenly contested match-up ,” said Hitters Coach James “Barman” Hanley. “We have been in training for some time now in preparation for the start of the league and the Antiguan Champions will be the perfect team to access our readiness for the 2009 season,” Hanley continued.

Hitters this year will feature the basically the same team that won them the national title last year.  With the re-acquisition of star forward Anthony “Jabal”  and the pending summer return of Marvin Davis and the almost 7 foot center Jerran Morris Hitters will no doubt have to be considered favorites. However Ghetto Roots has acquired national guard Levi “By-By” Fyfeild from the McKnight Trotters. Fyfeild’s presence is sure to enhance the team and will ensure that Ghetto Roots will once again be Hitters toughest challengers for the 2009 season.

The 2009 season tips off at 5pm on Sunday with the traditional march past and 2 match-ups including 2009 finalist Horsfords Ghetto Roots vs 2007 Champions the St.Pauls Tuff Knots in game 1 and the Antigua Champions the defense force warriors vs SKABA Champions Rams Hitters.

For more information on the St.Kitts Amateur Basketball Association got to the association website at:
http://www.stkittsbasketball.com