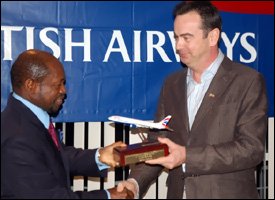 British Airways Manager for United Kingdom and Global Sales (Corporate & Leisure), Mr. Richard Tams expressed optimism that the partnership between the premium brand airline and a premium island like St. Kitts will result in a sustained service.

Speaking at a welcome reception, shortly after the British Airways’ first scheduled service landed at St. Kitts’ Robert L. Bradshaw International Airport on Saturday night, Tams said the airline do not start new routes lightly and the British carrier was very proud to be re-establishing this key link between the United Kingdom and St. Kitts and Nevis.

“We would not be flying to St. Kitts if we did not think that it had enormous potential,” said the British Airways official, who added that the airline looks forward to brining many passengers from the United Kingdom and other areas around Europe to St. Kitts and Nevis.

Tams said the Gatwick-London to St. Kitts flight is British Airways 11th service to the Caribbean and is part of a strategy by the British carrier to “really develop the business we have in the Caribbean and so far it has brought some very encouraging results.”

“Our customers are telling us that they really value travelling with a carrier like British Airways that has the history and longevity especially in this very uncertain market and they know we are going to be here in the long run,” said Tams.

“I am very optimistic about this service and British Airways is extremely committed to make it work. There is every indication that if you bring a premium brand airline together with a premium brand island, then it is going to work. I am very optimistic about the future of this service,” said Tams, who has a 19-year career with the British airline.