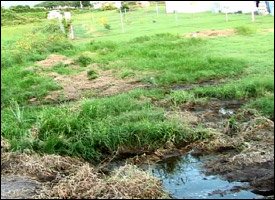 Some residents of Bath Village Housing Project expressed delight with the Nevis Island Administration’s (NIA) move to mend drainage problems that had affected them for years and was worsened by the passage of Hurricane Omar.

“As a resident of Bath Village Housing Project, I am very happy to see the government come and check out our roads and the housing project. It is very nice to see you are gooing to do something about it and it will be greatly appreciated,” Little Lenny said.

While Ms. Keba Williams said her greatest problem with the drainage was she would be stuck inside her home till the water ran off whenever it rained heavily.

The comments were among those made during a site visit to the area earlier this week. Minister with responsibility for Housing and Lands on Nevis Hon. Robelto Hector said the matter was brought to his attention by the Nevis Housing and Land Development Corporation (NHLDC) and explained that although the problem of improper drainage was inherited by the sitting NIA, it was committed remedy the problem.

Manager of the NHLDC Mr. Eustace Nisbett Jr. said the Bath Housing Project was one of the first undertaken by the Corporation in 2004.

He indicated that the NHLDC had received a number of complaints from the residents with regard to the improper drainage in the development, especially since the passage of Hurricane Omar.

Meantime, Project Manager of Surrey Paving and Aggregate Mr. Desmond Lewis was part of the touring delegation with Minister Hector and Mr. Nisbett, explained that the company was called on by the NHLDC to carry out a complete assessment of the housing development.

“We are going to be doing a feasibility study as quickly as possible to ensure that we mitigate the flooding problems that currently exist.

“We are definitely going to be meeting with the residents of this community to outline to us where the drainage problems are and see how best we can come up with a solution to solve this problem,” he said.

Mr. Lewis also said that the public would be notified when and how soon work would commence.

Director of Community Cohesion Mr. Abdu Kareem Ahmed who was also present, said he was pleased to witness the government’s response to the needs and concerns of the community.