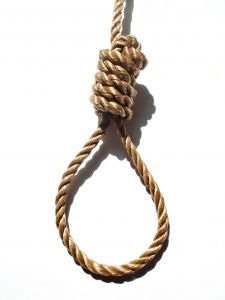 St. Kitts In The Spotlight For Hanging
Photo By Erasmus Williams

BBC Caribbean is regarding last December’s hanging of convicted killer Charles Elroy Laplace as “one of the single most powerful acts against rising violent crime in the Caribbean.”

In a feature headline “Declaring war on violent crime,” the BBC also noted that while there were just over 20 homicides in St. Kitts and Nevis in 2008 compared to over 1,000 in Jamaica, the authorities in Basseterre made no apology for resuming hanging after a ten year period.

The BBC reported that the court-ordered sentence was carried out on the heels of a national consultation on violent crime a few weeks earlier and that the Denzil Douglas Labour Party government has decided to open the New Year with the setting up of an anti-crime task force.

The National Security Ministry has sent its proposal to Cabinet, hoping for speedy implementation of the recommendations that came out of December’s nation-wide consultation.

According to the BBC, “This is just one country’s attempts at tackling a growing blight on Caribbean society – the scourge of violent crime.

The BBC feature also reported that in St. Lucia where growing serious crime is a major concern, the authorities there have signalled that they are going to push for legislative changes to facilitate execution of convicted killers.

That translates into taking back the power to conduct hangings that has been eroded by the Privy Council’s Pratt and Morgan ruling that, until the St. Kitts execution had effectively prevented executions being carried out in the English-speaking Caribbean.

The BBC noted that despite the objections Amnesty International and other rights groups, the governing United Workers Party in Castries firmly believes bringing back the practice of hanging as allowed for constitutionally.

It also reported brutal slayings in the region including three massacres in Guyana that between them claimed 31 lives, which pushed up the murder rate by 36 percent in 2008, taking the total number of killings at 135.

In Jamaica the authorities continue to grapple with how to reduce the annual murder rate that reached more than 1400 in 2008, there have been calls for residents to be given the right to bear arms as a way of cutting violent crime.

The BBC reported that in Trinidad and Tobago, crime continues o be a major headache for the authorities who have pumped millions of dollars into fighting the problem without making any real dent.  The police in Port of Spain put the number of killings there in 2008 at 536, said to be a record.

The Report noted that Antigua gained an unwelcome measure of crime-related notoriety when two British honeymooners were brutally murdered last year at one of the country’s resorts.

Catherine Mullaney was killed during a suspected robbery at a hotel in July – her husband Ben died later in hospital in the UK.