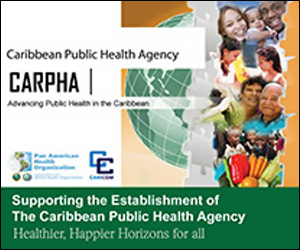 No Ebola Cases In The Caribbean

The Caribbean Public Health Agency (CARPHA) said it is monitoring the global situation closely with regards to the current outbreak of Ebola virus disease in Central and West Africa.

CARPHA said it remains in close contact with its regional and international partners regarding the outbreak in order to provide support to CARPHA Member States.

CARPHA said there have not been any cases of Ebola in the Caribbean, and the overall risk assessment for the Caribbean region remains low.

It said that continued monitoring of the situation will be conducted by the Caribbean Public Health Agency (CARPHA), pointing out that the level of risk may change as new information becomes available.

CARPHA said the public health risk posed by Ebola virus disease (EVD) to the Caribbean region, and its people, is considered low based on available information at this time.

“Continued monitoring of the situation will be conducted by the Caribbean Public Health Agency (CARPHA) to guide the adoption of effective control measures by national authorities,” said CARPHA.

The statement noted that the Ebola virus can spread through direct contact (through broken skin or mucous membranes) with blood or bodily fluids or tissues of infected animals or infected persons; indirect contact with medical equipment (such as needles) and environments that are contaminated with infected bodily fluids.

This provides good evidence of human-to-human transmission via the methods described above.

Together with meticulous case detection and contact tracing, the adoption and strict application of standard infection prevention and control precautions, and contact precautions by those providing direct care to patients or handling bodies, are the cornerstone to minimize the risk for further human to human transmission, should a case of EVD occur.

CARPHA pointed out further that with reference to previous viral hemorrhagic fever outbreaks, the international spread of EVD through long distance travel from the outbreak area to a non-endemic country has historically been an exceptionally rare event, and has never involved the Caribbean.

“However, it is recognized that no previous outbreak has been as widespread and complex to manage as the current one,” said the statement.

It said that additional cases of EVD infection are expected to be reported as the current outbreak continues to develop.

“Furthermore, it is likely that cases will continue to be exported to other countries by tourists, travelers, workers or others who might acquire infection following exposure. However, the risk for tourists, visitors or expatriate residents in affected areas, is still considered very low if basic hygiene and infection control precautions are followed,” the statement said.

It added that at this time, WHO does not recommend any travel or trade restrictions be applied to Guinea, Liberia, or Sierra Leone based on currently available information.

However, both the US Centers for Disease Control and Prevention (US CDC) and the Public Health Agency of Canada (PHAC) have recommended that its residents avoid all non-essential travel to Guinea, Liberia and Sierra Leone due to the ongoing, and unprecedented, Ebola virus outbreak.