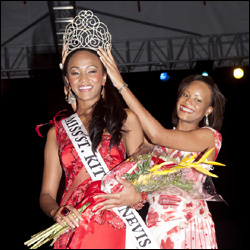 Twenty-three year old Iantavian Queeley’s hard work and dedication to win the second regional pageant title in addition to her Miss St. Kitts and Nevis crown should be adopted by young people in their endeavours.

So says the National Carnival Committee, the Ministry of Community Development, Culture and Gender Affairs and Minister of Culture, the Honourable Marcella Liburd in a joint congratulatory message to Ms. Queeley, who “has done it again by outshining contestants from fifteen other Caribbean countries.”

“Ms. Queeley’s continued success is a testimony to the hard work and dedication of both herself, and her chaperone, virtues which we hope other young persons would adopt in their endeavours,” said the message that hailed her for  winning every judged segment to walk away with the Ms. Jaycees Caribbean Queen Pageant title on Friday 29th July in Antigua.

Martina Johnson reporting for Antigua Observer.com said: “It was a “clean sweep.”

That’s how one could best describe St. Kitts/Nevis’ Iantavian Queeley’s victory over 15 other contestants in the Jaycees Caribbean Queen Competition at Carnival City on Friday night.

To the 23-year-old, the words “I came to win, to fight, to conquer, to thrive” are more than just the chorus of Nicki Minaj’s and Rihanna’s collaborative song Fly for when she put her brain, brawn and talent to work in the pageant, she undoubtedly outshone 15 of her Caribbean sisters in the each of the judged segments.

“It took a lot of hard work and dedication,” was what the newly crowned queen said it resulted in her ability to add this title to the two she recently won.

As for the talent segment, there were way too many monologues and few, if any, showcased anything but the ability to memorise; and even that did not go down too well for a few of them.

Quite a number of the contestants also stumbled in the interview segment.

It was Queeley’s spirited dance performance, highlighting the issue of society’s lack of concern for vagrants ““ how they got there and how to get them the help they need ““ which captured the audience and judges most.

Using an old shopping cart, draped with tattered clothing and other items as props, she skilfully danced to a medley of songs accompanied by a recording she made detailing her observations of how society treats the less fortunate.

Meantime, the queen’s evening gown was a body hugging scarlet red with several cut outs in the satin fabric that were filled in by red mesh, sequins and diamantes. The one strap dress was tight from bust to about midway of Queeley’s thighs and it continued to the ground with a mermaid finish of red feathers.

Queeley was fluid and fluent in answering both her questions in the interview segment. She was asked how her father’s examples of success have been an inspiration to her and what advice would she give to the  Ministry of National Security in her country on tackling increasing crime among youth.

In response to the first question, the Queen said, “My father started with very humble beginnings and now he has (risen) to the high ranks of the Royal St Christopher/Nevis Police Force. My father has always instilled in me that hard work, determination and focus will get you to achieve anything that you desire in life and that’s how he was able to help me.”

To the second question, she responded, “In addition to working closely with the police force, I would advise the minister that in order to alleviate, or rather lessen the amount of crime, one should get young people involved in more positive activities.

Queeley’s dad, Ian Queeley, who journeyed here and witnessed her victory over the other 15 delegates said, “I’m so proud of my little Tavie “¦ the girls are very talented and did a good job and I think the public must appreciate the tremendous hard work these girls put in “¦ but I’m ecstatic, elated; words cannot describe how I feel at this time.”

The elated father said history shows that never in one year has a St Kitts/Nevis queen swept up the three titles that Queeley currently holds.

And, young Queeley is now the third Kittitian to covet the Jaycees title, with the earlier wins occurring in 1984 and 2001.

For the first time in the history of the now 50th Annual Jaycees Caribbean Queen Competition organisers split the contest into two shows.

On Wednesday July 27, the delegates fought for Best Swimwear during a pre-show at Sugar Ridge in an effort to cut down the time spent at the final show held at Carnival City (Antigua Recreation Grounds) two nights after.

But contrary to the organisers prediction the July 29 show would wrap-up by midnight, it was not until three hours after the new Jaycees queen was crowned.

Inclement weather forced a delay of the scheduled 8 pm start by over two hours, disrupted the flow of the show and made the section of the grounds usually used for reserved seating too soggy for use.

The show was also poorly attended apparently as a result of the heavy intermittent rains that started since last week and was still falling periodically on the night of the Jaycees queen competition.

Admittedly, the show was somewhat captivating and the absence of a series of side shows was welcomed.

However, it was prolonged because organisers decided to show, on a screen, the very swimwear segment that was done Wednesday night and it appeared the video was not edited to save time.