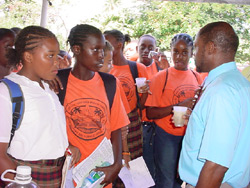 The CARICOM Community (CARICOM) is currently re-examining the scope and effectiveness of the overarching philosophy of “education for all.”

Prime Minister of St Kitts and Nevis, Hon. Dr. Denzil L. Douglas at the Education Symposium of the New York Conference on the Caribbean felt the discussion could not be timelier.

St. Kitts and Nevis boasts of being the first Caribbean nation to introduce free secondary since 1965.

“In New York, it is clear that you are grappling with the reality of the principle of “˜no child left behind’ especially its implications for poor black and Latino children, among whom I am sure are some descendants from the Caribbean. In the CARICOM Community as in New York, educators and researchers are quizzical about the growing trend of male underperformance or under achievement and are sensitive to the need for corrective action that may have significant social consequences,” said Dr. Douglas.

He noted that for the Caribbean Community, there is the additional issue related to the migration of skilled and highly trained professionals and the discussions on how to tackle the ‘brain drain’ or ‘brain gain’ to the mutual benefit of both societies.

“While this panel focuses on collaboration among our higher educational institutions, it is critical to note that viable tertiary systems are highly dependent on the foundations laid during pre-school and kindergarten through to the elementary and high school levels,” said Dr. Douglas.

The establishment of the CARICOM Single Market and Economy (CSME) provides, as one of its main objectives, the free movement of goods, services and people. The free movement of skills will no doubt accelerate the growth of Tertiary Level Institutions (TLIs) in the region.

“This anticipated growth will be anchored in common standards of assessments and accreditation and quality assurances, through the Caribbean Examinations Certificate (CXC), Caribbean Advanced Proficiency Examinations (CAPE) and the more recently approved Caribbean Vocational Qualifications (CVQ). They provide the basis of a structured and integrated educational system throughout the Caribbean Community and beyond. The only CARICOM country not so far involved in this integrated education system is Haiti. On the other hand, CXC and CAPE are written by students in St. Maarten in the Netherland Antilles,” said Dr. Douglas.

This illustration is mainly to demonstrate that the Caribbean Community provides a relatively homogenous education system that is reinforced by the trade, economic and social elements of the integration process, driven by the progress toward the CARICOM Single Market and Economy (CSME).

He said this has implications for global partnerships as the expanded market base and elimination of barriers created by the CSME will inevitably cultivate economic growth as the number of providers increase and as such, local and regional institutional collaboration and co-operation must be encouraged.

“I am sure that the Vice Chancellor of the University of the West Indies can speak more authoritatively on the existing and proposed initiatives between the UWI and other Universities in Caribbean and linkages that are being forged with higher institutions in the USA, in particular, in New York,” said Prime Minister Douglas.

He said one important innovation which Caribbean Heads of Government have endorsed is the development of the Caribbean Knowledge and Learning Network (CKLN) and the technology that it will provide through ICT connectivity among higher educational institutions. The interface between CKLN and the Caribbean Universities Programme for Integrated Distance Education (CUPIDE) is anticipated to result in cost-effective education both regionally and internationally.

But even as the Caribbean Community strives to modernize its approach and to prepare for the competition occasioned by the global liberalization of education, there are realities that must be faced and challenges that need to be confronted, in some cases and embraced in others.

A recent survey done by Caribbean Regional Negotiating Machinery for example, shows that the tertiary education sector in the CARICOM Community is characterized by a range of public, private and foreign-owned providers. There are over 150 institutions of which 60 percent are public, 30 percent private and the remaining 10 percent exist with some government support.

“It also shows that CARICOM States of St. Kitts and Nevis, St. Lucia and Grenada, have attracted a total of fourteen offshore tertiary education institutions to their locations, the majority of which are US sponsored and maintained medical schools,” said Prime Minister Douglas.

He said that the experience of these States with multinational tertiary institutions indicates that the commercial presence of those institutions has provided foreign direct investment.

“While the precise quantitative impact is yet to be determined in each country, the downstream business opportunities created is testament to the significant economic impact that FDI in Education Services can bring about,” said Dr. Douglas.