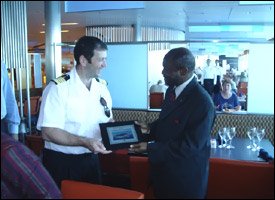 St. Kitts and Nevis Prime Minister and Minister of Tourism, Hon. Dr. Denzil L. Douglas has expressed his government’s appreciation to Celebrity Cruise Line for its tremendous support to the twin-island Federation as a cruise destination.

“St. Kitts and Nevis continues to be engaged and involved in the transformation of the economy. After nearly 400 years of exporting sugar, we are now exporting our natural beauty and the hospitality of our country,” said Prime Minister Douglas to the Commander of the Celebrity Solstice, Capt. Panagiotis Skyeogiannis.

“We want to thank you for being a partner as we charter this course in the development of St. Kitts and Nevis,” said Prime Minister Douglas.

Prime Minister Douglas, Minister of Finance, Dr. the Hon. Timothy Harris, Minister of State for Tourism, Sen. the Hon. Richard Skerritt; senior government, Port Authority and Tourism Authority officials were hosted to a luncheon on board and a tour of the cruise line, which is on its second visit to St. Kitts.

The Celebrity Solstice arrived from St. Maarten with 2,350 passengers and a crew of 1255 crew. From Florida it stops first in Puerto Rico and St. Maarten before arriving in St. Kitts.

The US$750 million ship has 10 dining venues, including four specialty restaurants in the same area of the ship.

It sails from on its 7-night Eastern Caribbean cruise from Fort Lauderdale weekly and will stop at Port Zante on alternate weeks.