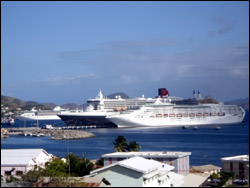 St. Kitts, which is fast becoming a well-sought after cruise destination, will get three additional visits by the Celebrity Solstice, the line’s newest ship.

The Celebrity Solstice, originally scheduled to embark on its maiden voyage on December 14, will sail three cruises before that date.

The ship owners said that for customers who booked the December 14 sailing because it was the maiden voyage, Celebrity has established a two-week rebooking window from May 29th through June 12th.

Customers can switch to the November 23rd cruise, without penalty, for the same accommodations at the original fare. Celebrity will reimburse airline change fees for up to $100 per person, provided acceptable proof of those fees is presented to Celebrity by January 31st.