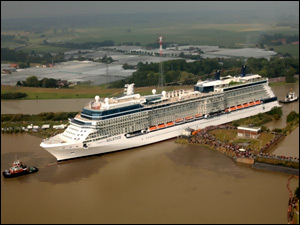 The world’s newest cruise ship that departed the Meyer Werft shipyard in Papenburg, Germany, on Sunday is set to begin visits to St. Kitts – Nevis in November.

In a milestone event known as “The Conveyance,” the 2,850-guest Celebrity Solstice made its way down the River Eems, as tens of thousands of area residents lining the river banks cheered and photographed the historic event.

“This is a very momentous occasion for Celebrity Cruises,” said the brand’s President and CEO, Dan Hanrahan.

“Celebrity Solstice is the perfect manifestation of what the Celebrity brand is all about: extraordinary service, spectacular dining, and fabulous style and design. And as the first in a series of five Solstice-class ships, it’s a vivid example of the growth and momentum of the Celebrity brand, and our commitment to meet our guests’ and travel agent partners’ demands for more vacation options with Celebrity.”

Among the wealth of attributes guests will find only on Celebrity Solstice are, the industry’s first Lawn Club, a lush, half-acre recreation area with real, growing grass; the industry’s first Hot Glass Show, with live glassblowing demonstrations presented in association with The Corning Museum of Glass; larger staterooms, with design inspirations offered by a panel of five women, hand-picked for their unique travel and hospitality insights; 10 varied restaurants, ranging from the dramatic, two-level “Grand Epernay” main dining room with a sweeping wine tower, to four exquisite specialty restaurants, to several stylish, casual venues; an entirely new category of accommodations, “AquaClass,” designed to offer a spa vacation experience at sea rivaling the best of those on land and a state-of-the-art theater and stage design, with three new leading- edge shows custom-designed for Celebrity with Poet Theatricals, in their first cruise line partnership.

“There also is the intangible attribute which is consistent across the Celebrity fleet, and that’s the extraordinary, anticipatory service our phenomenal staff offer our guests every day,” said Hanrahan.

Celebrity Solstice will be berthed in Eemshaven, Netherlands, from September 29 to October 24, with two separate sea trials planned during that period, in addition to crew arrivals, training, provisioning and finishing work onboard. The ship will depart Eemshaven on October 24 on a transatlantic voyage, with arrival in Fort Lauderdale planned for early November, followed by a series of promotional cruises for invited travel agents, press and other dignitaries.

The ship will be named in formal ceremonies on November 14, and will begin its maiden season November 23, with a series of alternating 7-night Eastern Caribbean cruises roundtrip from Fort Lauderdale, calling on San Juan, St. Maarten, St. Kitts, and Tortola during this Fall and Winter.