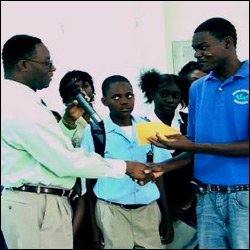 The Charlestown Secondary School (CSS) was on Friday June 13, 2008, the recipient of a cheque in the amount of EC$25, 000 from the Nevis Multi-Line Services, the largest donation from any single entity.

“I want to express the gratitude of the Nevis Island Administration to Mr. Liburd (donor), and Multi-Line Services and it gives me great pleasure in handing over this cheque to the principal Mr. Edson Elliott,” Mr. Wiltshire said.

He also recorded his commitment to the donor, that the money would be used for the sole purpose it was intended.

“I would like to assure Mr. Liburd that this contribution would be used to enhance the library and to ensure that our students have the means by which they can resource and research their work, so that they continue to perform at the high level they have been performing over the years,” he said.

Meantime, Principal of CSS Mr. Edson Elliott spoke of the company’s long-standing relationship with the learning institution.  He added that the Manager of the Nevis Multi-Line Services Mr. Andy Liburd (donor) was a former student of CSS.

Mr. Elliott too expressed his gratitude and made a promise to the donor.

“On behalf of the Charlestown Secondary School we have to thank Mr. Liburd and the Nevis Multi-Line for their continued contribution to the Charlestown Secondary School.  We make one promise that September morning; September 2008, we will have a library which is fully functional,” he said and added that the donation was the most substantial contribution that CSS had ever received from any single entity.