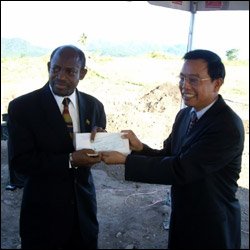 The Government of the Republic of China on Taiwan is contributing financially to the re”“settle of 25 families whose homes were destroyed or permanently damaged by Hurricane Omar on October 16.

Resident Ambassador of the Republic of China on Taiwan to St. Kitts and Nevis, on Monday afternoon presented a US$200,000 cheque to Prime Minister and Minister of National Security, Hon. Dr. Denzil L. Douglas during a ground breaking ceremony at Harry Phipps for the first phase of the re”“settlement programme.

“When Prime Minister Douglas voiced his concern about those affected by the hurricane and that they had to be relocated immediately and I share his compassion, I said “˜yes, we must do it immediately.’ And I reported to my country that we had to respond,” said Ambassador Wu.

He said that the US$200,000 is part of his Government’s contribution for the housing project that will re-settle the families affected by Hurricane Omar.

Ambassador Wu noted that the Republic of China on Taiwan is an island nation like St. Kitts and Nevis.

“We experience all year round typhoons, which you call hurricanes; (and) earthquakes, all types of disasters. We Taiwanese always teach our children that human beings would be able to conqueror nature and I realise that this simply encourages us to work hard. In fact with the greenhouse effect and climate change in recent years, my country has even experienced more natural disasters than before,” said Ambassador Wu, who noted that in 1999, Taiwan experienced a major earthquake that resulted in 3000 deaths.

Under the programme 12 one, two and three”“bedroom homes will be constructed for 12 families in phase one. Four homes will be built at Harry Phipps in Half Way Tree and eight at Wingfield, in Old Road for the householders from Half Way Tree, Verchild’s and Old Road.