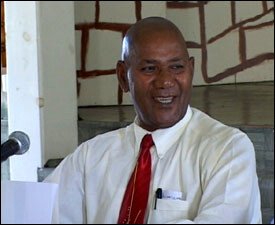 The Ministry of Health through funding from the Pan Caribbean Partnership on HIV/AIDS and UNAIDS has assisted the Christian Council in organizing a workshop designed to sensitize faith-based marriage counselors on issues relevant to HIV/AIDS counseling.

President of the St. Kitts Christian Council, Rev Fr. Isaiah Phillip said his organisation felt that the three-day “Capacity Building for Pre-Marriage Counselors” workshop was necessary.  He said that this was because the earliest work that the faith-based organization did pertaining to HIV/AIDS in the mid 1980s revealed that often the issues pertaining to the pandemic, disease in general, and people’s response, depended on the connection with their faith.  As such, it was felt necessary to increase the information and understanding of the faith leaders in order to make as broad a Christian response as possible to the pandemic.

Fr. Phillip explained that the Christian Council had previously coordinated two home-based care workshops for persons living with HIV/AIDS through its Stewardship of Life Programme, and continues its abstinence programme where single persons, youth in particular, are encouraged to refrain from sexual activity until marriage.

Minister of Health Honourable Rupert Herbert congratulated the Christian Council on its response to the pandemic noting that a multi-sectoral response was necessary in order to reduce the spread of HIV/AIDS and care for those who already have it.

He stressed the importance of HIV/AIDS counseling noting that the Church has moved beyond preaching abstinence to include HIV/AIDS counseling in its pre-marital counseling.  The Minister said that while the church has always counseled persons who are about to be married, the Ministry of Health was pleased that this next step had been taken.  He revealed that his ministry was working on new approaches one of which includes making HIV/AIDS testing a pre-natal requirement.

Minister Herbert said that it was also laudable that HIV/AIDS information be included in the pre-marital counseling for even married individuals are not immune to the disease.  He said he was certain that statistics would reveal that quite a few married persons became infected after marriage.  The Minister responsible for Health agreed that while loyalty is always stressed within the marriage bond, quite often marriages have been dissolved because of infidelity.