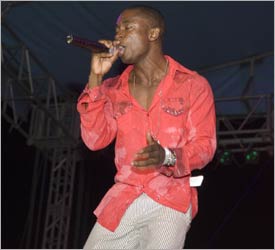 Young Jamaican reggae sensation Christopher Martin has been confirmed as one of the guest performers at the  Digicel Haynes Smith Miss Caribbean Talented Teen Pageant to be held in St.Kitts – Nevis on December 29th.

The Pageant, which is considered to be the most prestigious pageant of its kind in the Caribbean, has seen many big name Caribbean entertainers grace its stage including soca King and Queen Machel Montano and Allison Hinds as well as Edwin Yearwood, Jamesy P, Rupee and Bomani  along with Trinidadian comedians Rachel Price,Tommy Joseph and Jamaican radio personality Jenifer “Jenny Jenny” Small.

The talented singer/performer shot to instant fame and recognition shortly after winning the coveted Digicel Rising Stars title in 2005. He  is one of the most sought after young performers on the music scene.

With a slate of singles permeating radio and the Jamaican music charts including Giving It and Jamaican Girls, Christopher created history when he became the first Digicel Rising Stars alumni to score a hit single on any chart in Jamaica.

“˜It has been a wonderful journey so far, filled with new and promising encounters. It is also challenging but I love what I am doing, so it makes it that much easier’, Christopher remarked when asked about the journey from being an unknown to a popular personality.

Christopher’s growth as an artiste and an individual ever since he shot onto the scene in 2005 is quite evident. His vocal chops have improved drastically, he is now under the guidance of the Big Yard label which is one of the most prolific musical entities in Jamaica, and he has gained a lot of respect from his peers.

“˜I’ve grown tremendously and I am more confident in my performance. My voice also seems more richer and I know exactly what it is I am capable of. I think I have gained the respect from others, due to the amount of work that I have been putting in’, said Martin.

Some of Martin’s releases included Conscience, Christmas in Jamdown featuring the Katalys Crew, My Love for You, Take My Wings, Tonight, Giving It, and Jamaican Girls. He has worked with a number of top producers in the reggae/dancehall arena including Robert Livingston (Big Yard), Arif Cooper, Shane Brown and Christopher Birch.

Martin is presently studying Business Management and Accounting at the University of Technology (UTECH) in Jamaica. His lifelong goal is to become an entrepreneur.

“I am certainly looking forward to performing in St.Kitts at the 29th annual Digicel Miss Caribbean Pageant , said Martin. It will be my first visit to the island so I am definitely anxious and look forward to giving a truly memorable performance at the show,” Martin continued.