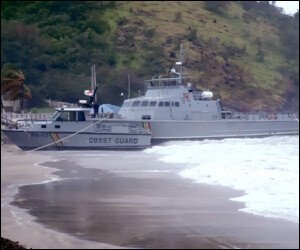 The flagship coast guard vessel, “The Stalwart” which has been out of commission for a while, should be back in operation patrolling the waters of St. Kitts and Nevis early in the new year, said Attorney General, Honourable Vincent Byron Jr.

Minister Byron, speaking on the most recent edition of the government’s radio programme Working For You, said “The Stalwart” is a major coast guard vessel that needed engine repairs.

“The Stalwart has been the flagship of the coast guard since the 1980’s. It’s a major vessel that needs repairs to be completed on the engine and so on. I would say further though that we do have coast guard assets in place that are operational and they do patrol our borders. But remember we have large borders and very limited resources,” Minister Byron said.

“We would expect that “The Stalwart” will be back in the waters early in the New Year to be able to act, as it was, as a station from which the smaller vessels can also do the work,” the attorney general added.

Previously, public relations officer of the St. Kitts and Nevis Defense Force, Captain Kayode Sutton, told the local media when the Stalwart was taken to dry dock, that in its absence, other vessels would be in operation.

“We always have more than one vessel in the water ready to respond to any rescue or disaster or any other operation we might be running,” Sutton said. “We do our very best with what we have. I would say that we have adequate resources but I would say more is always better. Patrols go out almost every day to man the shores which is day and night. We also have other ways of manning the shores”¦we have cooperation and we have assistance from other agencies andd other countries; America for example,” Captain Sutton said.

During the passage of Hurricane Earl in 2010, the coast guard cutter, “The Stalwart”, was one of two coast guard vessels beached on Timothy Beach in Frigate Bay.