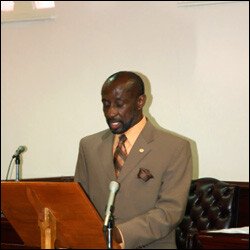 St. Kitts and Nevis’ Deputy Prime Minister Hon. Sam Condor says there was a need for an urgent adjustment in the Caribbean’s response “to what is one of the most devastating global epidemics of this century.”

“If we fail to have regional consensus on the pertinent issues going forward we risk marginalizing of our collective interest and needs,” Mr. Condor told Delegates from 16 Caribbean countries at a two-day meeting in Port of Spain, Trinidad, hoping to devise new regional strategies that will shape future HIV programming not only in the Caribbean, but globally.

The consultation will prepare the English, French, Spanish and Dutch-speaking Caribbean to adopt common policies ahead of the United Nations General Assembly High-Level Meeting on AIDS to be held in New York in June.

Mr. Condor, who was deputising for St. Kitts and Nevis Prime Minister the Hon. Dr. Denzil L.  Douglas, who has lead responsibility for HIV/AIDS matters within the quasi Caribbean Community (CARICOM) Cabinet, told the meeting being attended by senior policy makers as well as civil society organisations, that there is evidence to suggest that a transition in HIV/AIDS epidemiology “is imminent,” adding there is some indication “that the number of newly infected persons will be fewer than the number of persons placed on treatment.

“This is an indicator of the success of the global prevention efforts to date,” he said, noting that it made perfect sense now for the Caribbean to re-engineer its HIV/AIDS plans “to make them more relevant to prevalent needs as informed by situation analysis.

“Such systematic thinking we believe will attract the attention of the donor communities. Hence forth the critical success factor for the Caribbean and the recommended pathway”¦is to refocus attention and resources to selected evidence informed measures which will generate results and efficiencies while promoting country and people owned responses,” he said.

Mr. Condor said that it was therefore important for the region to understand that the way forward would be to “promote plans and programmes of, for and by the people supported by various entities representing public health, development and the private sector inclusive of the donor community”.

In the global AIDS pandemic, the Caribbean is the second-most affected region in the world. Among adults aged 15″“44, AIDS has become the leading cause of death and Condor said that while donor community responded to the crisis message, there is now a need for the region to reform its various HIV/AIDS campaign projects including the Pan Caribbean Partnership Against HIV and AIDS (PANCAP), “if we are to be taken seriously”.

He warned that with other situations occurring globally, “we run the risk of intensity of focus shifted and resources being diminished at a time when several fiscal constraints are affecting the public health sector’s capacity to cope”.

In his address, Roger Samuel, the Minister in the Office of the Prime Minister of Trinidad and Tobago, said that the region must “find ways of encouraging young people as part of the solution to HIV/AIDS” telling the audience “we need to fight fire with fire.”

He said that the situation regarding HIV/AIDS in the region must be taken “far more seriously than it has been taken in the past” and that “it is critical that as we put our inputs together (we need) to determine “¦where we go from here.”

Samuel said that the new policies should be such that the new generation “will not have to re-invent the wheel” reminding that the “issues on HIV/AIDS affect all of us.”

The junior minister said that it was also important for the region to understand the socio-economic issues linked to the disease and that the existing global challenges were also presenting factors that needed to be taken into consideration.

Earlier, Director of UNAIDS Caribbean, Dr. Ernest Massiah, underscored the need for the region to adapt and revise new strategies to deal with the virus, while Ainsely Reid of the Jamaica-based Greater Involvement of People Living with HIV, said that despite the progress reported in the region “we are still losing many people”

He said that persons had become complacent to the point that “people are dying with the drugs in their hands”.

A statement issued by UNAIDS prior to the start of the high level meeting here quoted Dr. Massiah as saying that the Caribbean Consultation provides an “exceptional opportunity for the Caribbean to position itself in the world.

“If we don’t get our act together, the Caribbean will not have a voice when the future of the global AIDS response is determined,” he warned.